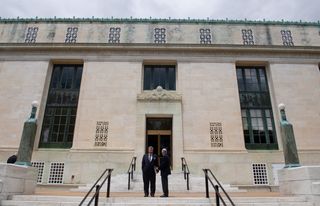 The National Academy of Sciences building is seen during the Humans to Mars Summit, in Washington, D.C., May 14, 2019.
(Image: © Saul Loeb/AFP/Getty Images)

Members of the distinguished National Academy of Sciences (NAS) can now be kicked out of the group for proven cases of misconduct that include sexual harassment or other "egregious violations to a new Code of Conduct," according to a statement from the NAS this week.

This is the first time in the academy's 156-year history that any member could be expelled from the group, a change that the New York Times referred to as a "landmark shift in policy."

With this new amendment to the NAS bylaws — which passed with 84% of ballots cast in favor and 16% against — any member can bring forth evidence of a violation to the Code of Conduct. The NAS code bans any members from "discrimination, harassement and bullying"; sexual harassment in the bylaws is defined as "unwelcome sexual advances, requests for sexual favors, and other verbal or physical conduct of a sexual nature that creates an intimidating, hostile, or offensive environment," according to the code. [Female Firsts: 7 Women Who Broke Barriers in Science and Tech]

Violators of the amendment could be expelled by a two-thirds majority vote by the academy's 17-person governing council, according to Science magazine.

"All women who have had a tough road — even those who have made it — I'm sure like me are happy to see this day where they can finally say: 'The climate is gonna change,'" said NAS president Marcia McNutt, as reported by Science. "No longer will a climate be tolerated that doesn't allow women to have the same chance as their male colleagues to thrive."

For instance, pioneering astronomer and current NAS member Geoffrey Marcy resigned from his position at the University of California, Berkeley, in October 2015, after the university found him guilty of sexual harassment of students there, as reported by the Times.

Columbia University, in 2018, let go of top neuroscientist Thomas Jessell for violating the school's policies and values; according to the school paper, Jessell "was engaged in a relationship with a lab member under his supervision for years, violating University policies on consensual romantic and sexual relationships." (Jessell is no longer an NAS member; he died on April 28.)

NAS boasts 2,350 members and 485 foreign associates — about 190 of whom are Nobel Laureates. Only NAS members can nominate a prospective member; that nominee is then thoroughly vetted and approvedby vote at the NAS's annual meeting in April.