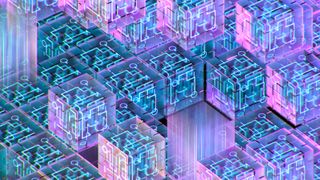 The era of quantum supremacy is nigh.

Quantum computers, which make calculations with entangled particles, or qubits, are poised to overtake their conventional counterparts very, very fast.

And it's all captured by a new law of computing, known as Neven's Law, according to a fascinating new article in Quanta Magazine.

So, what exactly is Neven's Law? Named after Hartmut Neven, the director of the Quantum Artificial Intelligence Lab at Google who first noticed the phenomenon, the law dictates how quickly quantum processors are improving, or getting faster at processing calculations, relative to regular computers.

Quantum computing is being hailed as a revolution in the digital realm. That's because of the way these computers store information, in itsy-bitsy particles that follow the strange rules of the quantum world. The result can be incredibly powerful and fast processing. For instance, while traditional computers store all data as 1s or 0s, quantum bits of data can exist in multiple different states at the same time, meaning that more data can be kept in fewer bits, in this case qubits, and way more calculations can be processed in a flash.

However, not everyone is convinced that quantum supremacy is knocking on our door. Andrew Childs, the co-director of the Joint Center for Quantum Information and Computer Science at the University of Maryland, told Quanta that silicon computers are also improving quickly, and he doubts that quantum computing could actually be improving at a doubly-exponential rate.

Either way, nobody doubts that the quantum era is coming. And we better be ready.

You can read the rest of the Quanta story here.