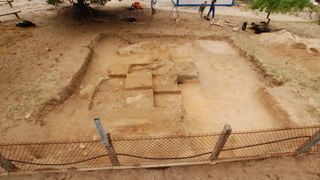 Kindergarten: It's a magical place where children learn fun new ways to play together, sing together, and – for some lucky tots in the south of France – dig up the first bits of 5,600-year-old human remains together.

That's what happened, more or less, in 2006, when a group of schoolchildren in the town of Saint-Laurent-Médoc accidentally dug up some bits of old bone in their kindergarten playground. It turns out that part of their school was built on top of an ancient burial mound which, early analysis suggested, held human remains that were thousands of years old. Now, a new study of the mound — known as Le Tumulus des Sables — reveals that the site is far older and far more crowded than previously thought. [The 25 Most Mysterious Archaeological Finds on Earth]

Writing in the April 2019 issue of the Journal of Archaeological Science: Reports, a team of archaeologists excavated the mound to find no fewer than 30 individuals (20 adults and 10 children) interred in a mound only about 1.6 feet (50 centimeters) deep. More surprising still is that, according to a radiocarbon analysis of several teeth found in the pit, the deceased were placed there over a 2,000-year period, beginning in the late Neolithic era (about 3600 B.C.) and ending in the Iron Age (1250 B.C.).

Why this seemingly unremarkable spot was used to host the dead for more than two millennia is a question that still vexes the researchers.

"It's unusual because it's not a really obvious or prestigious [site]," lead study author Hannah James, a doctoral candidate at the Australian National University in Canberra, said in a statement. "It's not on a hill or an obvious location, so there's something else about this site which caused people to come back and use it."

As for the dead, little is known except that most of them were locals. An analysis of the isotopes (versions of elements) in the dental remains showed that all of the individuals examined ate from the land, rather than fishing from the nearby river or the Atlantic Ocean. One individual seemed to have been born in a much colder climate, and may have been transported to the site after death, the researchers wrote.

The mound also included a hodgepodge of grave relics, including broken ceramics, metal and animal bones. In other words, plenty of interesting material for the kindergarten's next session of show-and-tell.