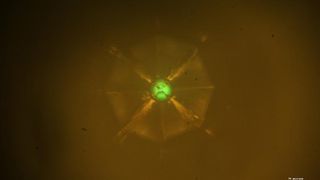 A superconductor lets electricity flow through it perfectly, without losing any of it.

Now, scientists have discovered a superconducting material that works at a possibly record-breaking high temperature, moving a step closer to the goal of achieving such perfection at room temperature.

Make things cold enough, and electrons zip through metals without generating any resistance, heating up, or slowing down. But this phenomenon, known as superconductivity, has historically worked only at extremely cold temperatures that are just a tiny bit above absolute zero. That has made them useless for applications like extremely efficient electric wiring or incredibly fast supercomputers. In the past several decades, scientists have created newer superconducting materials that work at ever higher temperatures.

In the new study, a group of researchers inched even closer to their goal by creating a material that is superconductive at minus 9 degrees Fahrenheit (minus 23 degrees Celsius) — one of the highest temperatures ever observed.

The team examined a class of materials called superconducting hydrides that theoretical calculations predicted would be superconducting at higher temperatures. In order to create these materials, they used a small device called a diamond anvil cell that is made up of two small diamonds that compress materials to extremely high pressures. [The Mysterious Physics of 7 Everyday Things]

They placed a tiny — a couple microns long — sample of a soft, whitish metal called lanthanum inside a hole punched into a thin metal foil that was filled with liquid hydrogen. The setup was connected to thin electrical wires. The device squeezed the sample to pressures between 150 and 170 gigapascals, which is over 1.5 million times the pressure at sea level, according to the statement. They then used X-ray beams to examine its structure.

At this high pressure, the lanthanum and hydrogen combine to form lanthanum hydride.

The researchers found that at minus 9 F (minus 23 C), lanthanum hydride demonstrates two out of three properties of superconductivity. The material showed no resistance to electricity and its temperature dropped when a magnetic field was applied. They didn’t observe the third criterion, an ability to expel magnetic fields while cooling, because the sample was too small, according to an accompanying News and Views piece in the same issue of the journal Nature.

"From a scientific standpoint, these results suggest that we might be entering a transition from discovering superconductors by empirical rules, intuition or luck to being guided by concrete theoretical predictions," James Hamlin, an associate professor of physics at the University of Florida, who was not a part of the study, wrote in the commentary.

Indeed, a group reported similar findings back in January in the journal Physical Review Letters. Those researchers found that lanthanum hydride could be superconductive at an even higher temperature of 44 F (7 C), as long as the sample was taken to higher pressures — around 180 to 200 gigapascals.

But this new group found something very different: At those high pressures, the temperature at which the material displays superconductivity decreases abruptly.

The reason for the discrepancy in the findings is unclear. "In such cases, more experiments, data, independent studies are needed," senior author Mikhail Eremets, a researcher of high pressure chemistry and physics at the Max Planck Institute for Chemistry in Germany, told Live Science. "Now we can only discuss."

The team is now planning to try to reduce the pressure and raise the temperature needed to create these superconducting materials, according to the statement. In addition, the researchers are continuing to search for new compounds that could be superconducting at high temperatures.

The group published its findings yesterday (May 22) in the journal Nature.