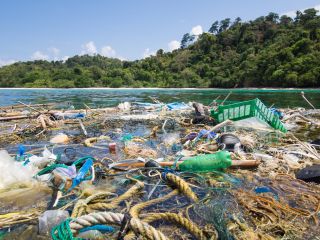 Garbage floating in the water by an island.
(Image: © Shutterstock)

The Mediterranean islands of Corsica and Elba are famous for being the birthplace and exile prison, respectively, of Napoleon Bonaparte. But now the isles might be known for something else: being the neighbors of a chronically forming garbage "island" floating in the Mediterranean Sea.

The sea's currents periodically carry the trash — a blob measuring tens of miles long — north, just between the two islands, according to The Local, a French news outlet.

"This is a situation that is chronic," because of the Mediterranean's currents, François Galgani, of the Corsican branch of the French maritime research institute IFREMER, told France Bleu, a radio station in France. (His statement was translated from French.) [In Images: The Great Pacific Garbage Patch]

The currents in the northwestern Mediterranean send garbage floating in the sea up along the western Italian coast, where it arrives at the base of Elba, the largest island in the Tuscan archipelago, Galgani said.

Once there, the trash "cannot pass, and it will rush into the Corsican canal," Galgani told France Bleu. "And that is why we have higher densities [of waste in this area]." The trashy situation can get particularly bad when it's windy: For instance, the northeastern winds that blow during the summer can send "massive arrivals" of debris to the Corsican coast, he noted.

However, unlike the Great Pacific Garbage Patch (located in the North Pacific, between California and Hawaii), the Mediterranean patch isn't a permanent fixture. The trash usually hangs around for a few days or weeks, although sometimes it lingers for months, Galgani said.

It's possible that some of the trash in the patch could be salvaged. For instance, fishing nets stuck in the chunky glob could be repaired and reused, Galgani said. However, much of the waste cannot be recycled. "They are very heterogeneous materials, there are different types of plastics," and it would be expensive to collect and recycle them, he said. "So, it will not happen."

Even so, it would be worth everyone's while to clean up the patch, not only for animals but also for locals and tourists.

"There are places where we have a real plastic soup," Océane Couturier, a member of the association Mer et Vivre (Sea and Life), told France Bleu, in French. "The problem in the end is that this plastic will accumulate in the tissues of fish, will diffuse its toxic products, and we ... will eat these fish."

This garbage patch isn't the only recent news of trash polluting beautiful islands. The remote Coco Islands of Australia now have an estimated 414 million pieces of debris littering their shores, and the vast majority of that waste is buried beneath the surface, according to a May 16 study in the journal Scientific Reports.