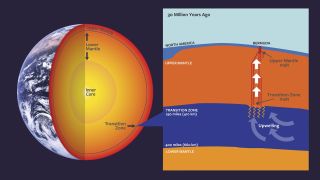 For the first time, scientists have evidence that a layer deep beneath Earth's surface can create volcanoes.

The layer, known as the transition zone, lurks in Earth's mantle between 250 and 400 miles (400 to 640 kilometers) under the crust. This zone is rich in water, crystals and melted rock.

The study found that these superhot materials can percolate to the surface to form volcanoes. [10 Most Hazardous Countries for Volcanoes (Photos)]

Scientists have long known that volcanoes pop up when tectonic plates on top of Earth's mantle converge or when mantle plumes form hotspots on Earth's crust, much like pimples erupting on a person's face. But until now, scientists didn't know that the transition zone — a region sandwiched between the upper and lower mantle — was involved, the researchers said.

"We found a new way to make volcanoes," study senior researcher Esteban Gazel, an associate professor in the Department of Earth and Atmospheric Sciences at Cornell University, said in a statement. "This is the first time we found a clear indication from the transition zone deep in the Earth's mantle that volcanoes can form this way."

The scientists made the discovery by studying a 2,600-foot-long (790 meters) core sample that was drilled in Bermuda in 1972 . This core is now housed at Dalhousie University in Nova Scotia, where it was examined by study co-author Sarah Mazza, a researcher of planetology at the University of Münster in Germany.

She expected the core to show that the volcano that made Bermuda arose from a mantle plume, which is how Hawaii formed. But in analyzing the core's signature isotopes, or versions of elements; water content; and other compounds, she found something else entirely.

It appears that this particular spot in the transition zone — located deep below the Atlantic Ocean — was created, in part, by subduction events during the formation of the supercontinent Pangea. About 30 million years ago, a disturbance in the transition zone, likely related to mantle flow, led magma from the zone to surge toward Earth's surface, Mazza and her colleagues discovered. This surging magma, in turn, formed the now-dormant volcano under the Atlantic Ocean that made Bermuda.

"I first suspected that Bermuda's volcanic past was special as I sampled the core and noticed the diverse textures and mineralogy preserved in the different lava flows," Mazza said in the statement. "We quickly confirmed extreme enrichments in trace-element compositions. It was exciting going over our first results … the mysteries of Bermuda started to unfold."

When studying the core, Mazza and her colleagues found geochemical signatures that matched those from the transition zone. These clues included higher amounts of crystal-encased water as compared to subduction zones, or regions where one tectonic plate is diving beneath another, she said.

Now that researchers know that disturbances in the transition zone can lead to the creation of volcanoes, they'll likely find more instances of this geological phenomena on Earth, the scientists said.

"With this work, we can demonstrate that the Earth's transition zone is an extreme chemical reservoir," Gazel said. "We are now just now beginning to recognize its importance in terms of global geodynamics and even volcanism."

The study was published online May 15 in the journal Nature.