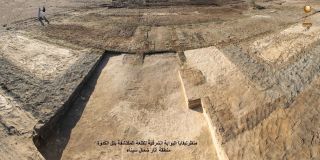 Archaeologists in Egypt have discovered the ruins of an ancient fortress dating to the 26th Dynasty, the last dynasty in which native Egyptians ruled before the Persians conquered the country in 525 B.C., according to the Egyptian Ministry of Antiquities.

Researchers uncovered parts of the mud-brick stronghold — including the northeastern and southeastern towers — at the Tell El-Kedwa site in North Sinai. Previously, in 2008, archaeologists had excavated the military citadel's eastern wall, but the fortress is so large, it took until now to unearth more of its remains.

Apparently, the spot was a prime location for a fortress. Archaeologists found the ruins of a younger military outpost that was built on top of this one's remains, the archaeologists said. [Photos: Mummies Discovered in Tombs in Ancient Egyptian City]

The original fortress "is considered one of the oldest fortresses to be discovered" in the country, Moustafa Waziri, secretary-general of the Supreme Council of Antiquities in Egypt, told the Egyptian news outlet Ahram Online.

The walls of the older fortress are incredibly thick, measuring nearly 23 feet (7 meters) in width, the Egyptian Ministry of Antiquities reported in a statement. It also has four towers. In contrast, newer fortresses built in the following centuries were even more protected, with walls that are 36 feet (11 m) wide and include a total of 16 towers.

Curiously, the old citadel also has chambers full of sand, broken pottery and debris, which might have helped to support its heavy walls, Nadia Khadr, head of the Central Department of Lower Egypt Antiquities, said in the statement. These chambers may have also served as rainwater drains, which was characteristic of the 26th Dynasty.

In addition, the archaeologists revealed the presence of an ancient entrance to the fortress, in the form of a side gate on the northeastern side of the wall, Hisham Hussein, director general of North Sinai Antiquities, said in the statement. Just to the right of this entrance are the remains of the room that may have been occupied by guards who monitored the gate, Hussein said.

The excavation also uncovered an almost 280-foot-long (85 m) wall on the fortress's southern side and the remains of houses within the western part of the fortress. One of these houses had an amulet with the name of King Psamtik I, who kicked out the Assyrians from Egypt and reunited the country when he founded the 26th Dynasty. He died in 610 B.C.

Based on this amulet, "initial studies suggest that the fortress most probably dates back to the first half of the 26th Dynasty, specifically the era of King Psamtik I," Hussein told Ahram Online.

Whoever held the fort faced a formidable enemy, as the walls showed evidence of a severe attack, the archaeologists noted.