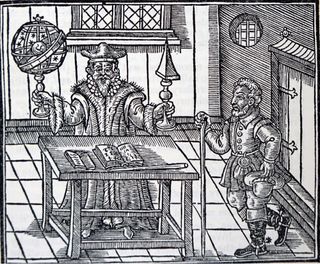 A woodcut showing the astrologer and his client, by John Melton, 1620.
(Image: © Universal History Archive/UIG via Getty Images)

The books belong to the rather shady astrologist and healer Simon Forman, who lived between 1552 and 1611 in England, and his protégé, Richard Napier. Forman and Napier were astrologers, a role that included providing health care in the early modern period.

"It was understood that celestial movements influenced human lives and bodies through hidden beams, just as today we accept [that] the moon affects tides," University of Cambridge social historian Lauren Kassell said in a new article accompanying the casebook collection's online posting. "Astrologers like Forman understood how these forces worked." [Amazing Astronomy: Victorian-Era Illustrations of the Heavens]

And these individuals offered cures to the afflicted — cures that could range from bloodletting to "pigeon slippers," or a whole slit-open pigeon worn on each foot.

Forman was born in Wiltshire and spent time at the University of Oxford studying medicine and astrology. He survived a brush with the plague in 1592, which bolstered his reputation as a healer. Six years of Forman's case notes, taken between 1596 and 1603, have survived. Now, all those notes, constituting 80,000 cases, are available online at casebooks.lib.cam.ac.uk.

The books are searchable by date, practitioner, patient symptoms and other factors, some having to do with Forman's more unsavory personality traits — like his tendency to become a little too involved with his patients.

"We had to create a coding category for stalking," Kassell said.

Indeed, Forman was an unpleasant narcissist, Kassell said. The astrologer frequently attempted to seduce his patients, and little about his work stands up to modern notions of medical ethics.

But the notes are a treasure trove of information about the medical and personal concerns of typical Elizabethans. Some are tragic, such as the case of 38-year-old Alice Woodward of Stoke Hammond, whom Napier saw with regard to the woman's eighth pregnancy. All but one of Woodward's previous pregnancies had ended in stillbirth, and she feared witchcraft.

Other cases lay out sordid tales. The 28-year-old John Wilkingson of Olney came to Napier with a case of gonorrhea, which the man had spread to a married woman. Wilkingson, described by Napier as "a filthy person," also had a problem with peeing blood due to a rapier injury to the urethra.

Forman and Napier consulted astrological charts in search of answers for their patients, and they also prescribed what passed for treatments at the time. According to the archive, bloodletting was one common option, though the pair sometimes prescribed herbal remedies as well, including tobacco.

Some treatments were particularly unsavory, including ingesting the powdered skull of a dead man or the touch of a dead man's hand. In several cases, the astrologers recommended that the afflicted person slit the bodies of two pigeons and wear the carcasses on each foot. Plenty of the treatments were downright toxic, including compounds containing mercury.

Many of the ailments brought to Napier and Forman weren't physical at all, but mental. Several patients are described as "lunatick" and others as "sick at hart." In 168 cases, the patients were suicidal or had died by suicide. Sometimes, these problems were blamed on witchcraft or devils.

Forman himself had a roller coaster of a career. He was banned from medical practice by the Company of Barber-Surgeons and did a few stints in prison for the equivalent of medical malpractice before regaining a license to practice medicine from the University of Cambridge. He died in 1611, leaving behind a ream of scribbled notes and a window into the myth and medicine of Elizabethan England.