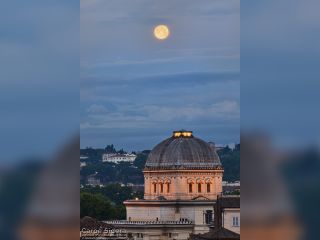 Astrophysicist Gianluca Masi took this photo of the May 2019 Blue Moon as it crescendoed over the Great Synagogue of Rome.
(Image: © Copyright Gianluca Masi)

Usually, a Blue Moon marks the second time a full moon rises within the same month. But the full moon arriving on Saturday (May 18) is May's first full moon, so why are people calling it a Blue Moon?

The answer has to do with an obscure rule, according to Space.com, a sister site of Live Science.

In this case, the May 18 moon — also known as the Full Flower Moon — is called a Blue Moon because it's No. 3 of four full moons in a single season. Usually, seasons have only three full moons apiece, Space.com reported. [Photos from the Moon's Far Side! China's Chang'e 4 Lunar Landing]

The spring season began on the equinox, on March 20. That very night, a moon known as the Full Worm Moon shone in the sky. After that, the Full Pink Moon rose on April 19. After this Saturday's Blue Moon, the fourth, and last, full moon of the season, the Full Strawberry Moon, will illuminate the sky on June 17.

Then, spring will end on June 21, when the summer solstice arrives.

This obscure Blue Moon rule says that when one season has four full moons, the third one must be called a Blue Moon, so that the fourth full moon can be called a "late moon," according to Space.com.

But despite its name, this moon won't be tinted navy, aquamarine or cerulean. The moon appears blue only when the right atmospheric conditions happen on Earth. For instance, a big volcanic eruption that releases a lot of dust can make the moon appear blue to Earthlings, as can dust storms and forest fires.

You can see Saturday's Blue Moon starting at 5:11 p.m. local time (2211 GMT), so long as the skies are clear. To watch it live over the skies of Rome, tune in here.

Editor's Note: This article was updated to change "summer equinox" to "summer solstice."