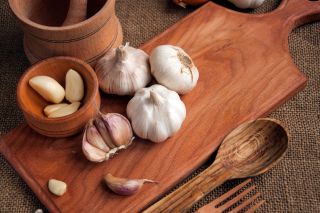 Why does garlic make our breath stink?
(Image: © Shutterstock)

Since at least 5,000 years ago, people have enthusiastically eaten garlic. Its pungent, slightly spicy flavor infuses curries, pastas, stir-fries and even the occasional dessert. But these delicious dishes can come with an aftershock: the sometimes off-putting aroma of garlic breath that lingers for hours afterward. So why do people love the taste of garlic, but hate the resulting garlic breath?

Chopping garlic releases a heady mix of chemical compounds called sulfides, said Sheryl Barringer, professor and department chair of food science and technology at The Ohio State University. These volatile molecules are what give garlic its "distinctive, pungent garlickiness," she said. When we cook garlic, the sulfide molecules rise into the air and fill the room with their pleasing aroma. Then "we put it into our mouths, the volatiles go up into our nose, [and] the smell is really what makes us like it," Barringer told Live Science.

Garlic's initial appeal may have something to do with its potential health benefits, said Wilfredo Colón, professor and department head of chemistry at Rensselaer Polytechnic Institute in Troy, New York. There's some evidence that the compounds in garlic can help lower blood pressure and offer antimicrobial effects. Those benefits may cause us to subconsciously crave garlic, Colón told Live Science. At least until it turns on us, that is. [Why Does Slicing Onions Make Me Cry?]

Most meal-induced bad breath comes from leftover food particles decaying in the crevices of the oral cavity. But true garlic breath doesn't get its start until the food hits your stomach, Barringer said. There, gastric juices break down the garlic further, releasing sulfides and other vitamins and minerals. Most of these molecules proceed to your intestines for additional processing, but one — a tiny molecule called allyl methyl sulfide (AMS) — is small enough to slip through your stomach lining and into your bloodstream.

AMS is just one of many components of garlic's characteristic aroma. But it's the only one small enough to worm its way into your blood so quickly, Barringer said. As it circulates past your lungs, AMS just as effortlessly passes through the membranes that let oxygen and carbon dioxide into and out of your body. When you exhale, along with CO2, you release a puff of garlicky AMS.

The effect can persist for up to 24 hours, Barringer said. But there are a few foods that can come to your rescue, she and her colleagues have found. In a 2016 paper in the Journal of Food Science, Barringer and graduate student Rita Mirondo reported that eating apples, lettuce or peppermint significantly reduces the concentration of garlic byproducts a person breathes out. These foods work because they contain phenolic compounds, which bind with the sulfides and make them too big to go airborne.

Of course, there is another option: Simply learn to embrace the unique phenomenon. There's nothing about the aroma of garlic breath that makes it inherently unpleasant, Barringer said — we're just not used to smelling food coming out of people's mouths rather than going in.

"It's not that it's a bad odor, it's just that it's out of context," she said. Try considering it a tiny time capsule of the delicious meal you once enjoyed.