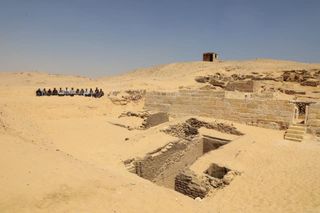 Archaeologists working southeast of the Giza Pyramids have discovered part of a cemetery that dates back about 4,500 years.
(Image: © Egyptian Ministry of Antiquities)

A 4,500-year-old cemetery has been discovered southeast of the famous Giza Pyramids, the Egyptian Ministry of Antiquities announced this morning (May 4).

Several tombs and burials were discovered in the cemetery, with one of the oldest tombs holding the remains of two individuals — one named "Behnui-Ka" and another named "Nwi." Their sarcophagi were found intact and their remains are likely inside; however, no information on them has been released. Analysis of the tomb's artifacts and hieroglyphic inscriptions revealed that the two men lived almost 4,500 years ago, during what historians often call the Fifth Dynasty, a time after the Giza Pyramids had been built.

According to those inscriptions, Behnui-Ka was a priest and judge who held a number of titles, including a lengthy one that calls him "the purifier of kings: Khafre, Userkaf and Niuserre." Khafre was a pharaoh who ordered the construction of one of the Giza Pyramids, while Userkaf and Niuserre were pharaohs who ruled Egypt during the Fifth Dynasty. [See Photos of the Ancient Egypt Cemetery & Burials]

Nwi also held a number of titles, including "chief of the great state," "the overseer of the new settlements" and "the purifier of King Khafre," according to the inscriptions found in the tomb. Analysis of the inscriptions and titles is ongoing.

Numerous artifacts were found in this tomb and others in the cemetery, including a limestone statue that may depict either Behnui-Ka or Nwi, as well as stone engravings and wooden masks.

Archaeologists found that the cemetery had been re-used about 2,600 years ago, when several individuals were buried there. Tomb re-use occurred frequently in ancient Egypt.

The newly discovered cemetery is located next to a cemetery that held the burials of people who built the Giza Pyramids, said Zahi Hawass, Egypt's former Minister of Antiquities, in the statement.

An Egyptian archaeological team led by Mostafa Waziri, the Secretary-General of the ministry's Supreme Council of Antiquities, discovered the cemetery. Research at the new cemetery is ongoing, with new discoveries likely