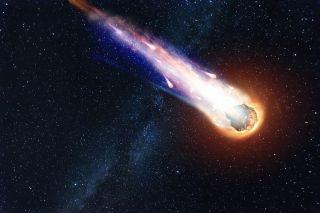 The raw materials from a comet have been found sealed inside a pristine, primitive meteorite.

The meteorite was found in the LaPaz icefield of Antarctica and has weathered very little since the time it crashed to Earth. According to a new study published today (April 15) in the journal Nature Astronomy, researchers found that this sample of space rock contains something strange: bits of the building blocks of a comet that became trapped in the meteorite's parent asteroid just 3 million years after the solar system formed.

"Because this sample of cometary building block material was swallowed by an asteroid and preserved inside this meteorite, it was protected from the ravages of entering Earth's atmosphere," study co-author Larry Nittler, a cosmochemist at the Carnegie Institution for Science, said in a statement. "It gave us a peek at material that would not have survived to reach our planet's surface on its own, helping us to understand the early solar system's chemistry." [10 Interesting Places in the Solar System We'd Like to Visit]

The La Paz sample is a type of meteorite called a carbonaceous chondrite, which are rarely found on Earth. These meteorites are of particular interest to scientists because they contain organic compounds and water locked up in their mineral structure. They can even contain amino acids and nucleobases, the building blocks of proteins and DNA, raising questions about their role in the origin of life.

Carbonaceous chondrites are thought to have formed beyond Jupiter, which might help to explain why the La Paz meteorite contains bits of comet. Unlike asteroids, which formed closer to the center of the dusty, gassy disk that became the solar system, comets formed far out on the edges of the proto-solar system. In this case, a far-flung carbonaceous chondrite seems to have incorporated some material from the solar system's distant reaches, locking it away for more than 4 billion years.

The speck of comet dust is just that, a speck, spanning about four-thousandths of an inch (0.1 millimeter) across.

Nittler and colleagues in Barcelona and Arizona studied variations in the nuclei of the atoms making up the comet sample and found that the hidden speck formed before the sun was born, likely in the outer disk region that gave rise to the icy Kuiper Belt, where scientists recently sent a spacecraft called New Horizons.

The comet material must have been dragged inward, to the part of the early solar system where carbonaceous chondrites form, closer to Jupiter, the researchers wrote in the study. Previous studies of comets, they wrote, have shown that material from the inner part of the solar system's disk could be transported out to the edges and be incorporated into the icy bodies there; the new study suggests that this transport could have gone both ways.

The find is also exciting because tiny interloper minerals (called xenoliths) like this comet's material might contain chemical signals of their original ice, the researchers wrote. That ice would be a fingerprint of the earliest solar system.

"Future dedicated searches for additional ultracarbonaceous microxenoliths in the most primitive carbonaceous chondrites may prove valuable for expanding our understanding of the full range of primitive astromaterials in the early solar system," the researchers said.