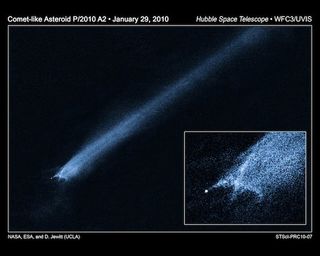 This is a NASA Hubble Space Telescope picture of what was first thought to be a comet but is probably an asteroid collision. The inset picture shows a complex structure that suggests the object is not a comet but instead the product of a head-on collision between two asteroids traveling five times faster than a rifle bullet (about three miles per second). The collision created a meteorite that was found to contain amino acids.
(Image: © NASA, ESA, and D. Jewitt (UCLA))

The components of DNA have now been confirmed to exist in extraterrestrial meteorites, researchers announced.

A different team of scientists also discovered a number of molecules linked with a vital ancient biological process, adding weight to the idea that the earliest forms of life on Earth may have been made up in part from materials delivered to Earth the planet by from space.

Past research had revealed a range of building blocks of life in meteorites, such as the amino acids that make up proteins. Space rocks just like these may have been a vital source of the organic compounds that gave rise to life on Earth.

Investigators have also found nucleobases, key ingredients of DNA, in meteorites before. However, it has been very difficult to prove that these molecules are not contamination from sources on Earth. [5 Bold Claims of Alien Life]

"People have been finding nucleobases in meteorites for about 50 years now, and have been trying to figure out if they are of biological origin or not," study co-author Jim Cleaves, a chemist at the Carnegie Institution of Washington, told SPACE.com.

To help confirm if any nucleobases seen in meteorites were of extraterrestrial origin, scientists used the latest scientific analysis techniques on samples from a dozen meteorites — 11 organic-rich meteorites called carbonaceous chondrites and one ureilite, a very rare type of meteorite with a different chemical composition. This was the first time all but two of these meteorites had been analyzed for nucleobases.

The analytical techniques probed the mass and other features of the molecules to identify the presence of extraterrestrial nucleobases and see that they apparently did not come from the surrounding area.

Two of the carbonaceous chondrites contained a diverse array of nucleobases and structurally similar compounds known as nucleobase analogs. Intriguingly, three of these nucleobase analogs are very rare in Earth biology, and were not found in soil and ice samples from the areas near where the meteorites were collected at the parts-per-billion limits of their detection techniques.

"At the start of this project, it looked like the nucleobases in these meteorites were terrestrial contamination — these results were a very big surprise for me," study co-author Michael Callahan, an analytical chemist and astrobiologist at NASA Goddard Space Flight Center, told SPACE.com.

Lab experiments showed that chemical reactions of ammonia and cyanide, compounds that are common in space, could generate nucleobases and nucleobase analogs very similar to those found in the carbonaceous chondrites. However, the relative abundances of these molecules between the experiments and the meteorites differed, which might be due to further chemical and thermal influences from space.

This findings  reveal that meteorites may have been molecular tool kits, providing the essential building blocks for life on Earth, Cleaves said. [7 Theories on the Origin of Life]

"All this has implications for the origins of life on Earth and potentially elsewhere," Callahan said. "Are these building blocks of life transferred to other places where they might be useful? Can alternative building blocks be used to build other things?"

In a different study, researchers discovered molecules that make up key parts of a vital biological pathway, the citric acid cycle, in a number of carbonaceous chondrites.

The citric acid cycle is "thought by many experts to be among the most ancient of biological processes," study co-author George Cooper, a chemist at NASA Ames Research Center, told SPACE.com. "One function of this cycle is respiration, when organisms give off carbon dioxide."

"It is always exciting to find extraterrestrial and ancient 4.6 billion-year-old organic compounds that might have had a role in early life," Cooper added.

Cleaves, Cooper and their colleagues detailed their findings in two studies online Aug. 8 in the Proceedings of the National Academy of Sciences.

This article was provided by SPACE.com, a sister site to LiveScience.