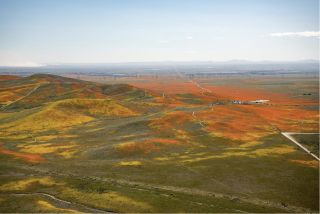 The spray of color is an annual event, made more intense by this year's wet winter in California. When the flowers are as dramatic as this year's display, they're called a "superbloom." The last drought-busting season that resulted in a superbloom in California was in 2017.

The desert environment of Southern California might seem a strange spot for wildflowers, but the orange California poppy (Eschscholzia californica) is well suited for hot environments. According to the U.S. Forest Service, the plants bloom in the spring and then go dormant in the heat of summer, allowing their tops to die off and surviving underground as a taproot. [Photos: The Sonoran Desert in Bloom]

NASA Armstrong's T-34 doesn't usually stop and smell the flowers; it's a training and mission support aircraft that often accompanies research flights for safety and documentation purposes. But the flight research center is near the Antelope Valley California Poppy Reserve, and Ross snapped the photos during a flight with Armstrong director of Safety and Mission Assurance and astronaut Rex Walheim.

The aerial view is more impressive than the view from space. In March, NASA released a shot of the wildflower bloom in Anza-Borrego Desert Park captured by the Landsat-8 satellite. From Earth's orbit, the vivid flowers blend in with the desert, leaving only the slightest hint of pale color detectable.