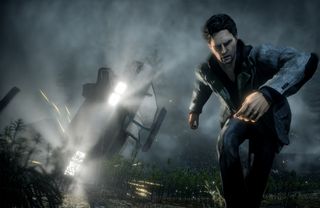 Playing video games before bedtime may give people an unusual level of awareness and control in their dreams, LiveScience has learned.

That ability to shape the alternate reality of dream worlds might not match mind-bending Hollywood films such as "The Matrix," but it could provide an edge when fighting nightmares or even mental trauma.

Dreams and video games both represent alternate realities, according to Jayne Gackenbach, a psychologist at Grant MacEwan University in Canada. But she pointed out that dreams arise biologically from the human mind, while video games are technologically driven by computers and gaming consoles.

"If you're spending hours a day in a virtual reality, if nothing else it's practice," said Jayne Gackenbach, a psychologist at Grant MacEwan University in Canada. "Gamers are used to controlling their game environments, so that can translate into dreams."

Gackenbach first became interested in video games in the 1990s, when she watched her son repeatedly kiss a new Nintendo gaming console on the way home from a Toys "R" Us. She had previously focused on studying lucid dreams, in which people have awareness of being in a dream.

The last decade of game-related research has since yielded several surprises, although the findings represent suggestive associations rather than definitive proof, Gackenbach cautioned. She is scheduled to discuss her work as a featured speaker at the Sixth Annual Games for Health Conference in Boston this week.

What dreams may come

Several intriguing parallels between lucid dreams and video games first emerged when Gackenbach examined past research on games. Both lucid dreamers and gamers seemed to have better spatial skills and were less prone to motion sickness.

The two groups have also demonstrated a high level of focus or concentration, whether honed through lucidity-training activities, such as meditation, or through hours spent fighting virtual enemies to reach the next level in a game.

That encouraged Gackenbach to survey the dreams of both non-gamers and hardcore gamers, beginning with two studies published in 2006. She had prepared by conducting larger surveys in-class and online to get a sense of where to focus questions.

The first study suggested that people who frequently played video games were more likely to report lucid dreams, observer dreams where they viewed themselves from outside their bodies, and dream control that allowed people to actively influence or change their dream worlds – qualities suggestive of watching or controlling the action of a video-game character.

A second study tried to narrow down the uncertainties by examining dreams that participants experienced from the night before, and focused more on gamers. It found that lucid dreams were common, but that the gamers never had dream control over anything beyond their dream selves.

The gamers also frequently flipped between a first person view from within the body and a third person view of themselves from outside, except never with the calm detachment of a distant witness.

"The first time we simply asked people how often they had lucid dreams, looking back over their life and making judgment calls," Gackenbach told LiveScience. "That's open to all kinds of bias, [such as] certain memory biases, self-reported biases."

Gackenbach eventually replicated her findings about lucid dreaming and video games several times with college students as subjects, and refined her methods by controlling for factors such as frequency of recalling dreams.

Finding awareness and some level of control in gamer dreams was one thing. But Gackenbach also wondered if video games affected nightmares, based on the "threat simulation" theory proposed by Finnish psychologist Antti Revonsuo.

Revonsuo suggested that dreams might mimic threatening situations from real life, except in the safe environment of dream world. Such nightmares would help organisms hone their avoidance skills in a protective environment, and ideally prepare organisms for a real-life situation.

To test that theory, Gackenbach conducted a 2008 study with 35 males and 63 females, and used independent assessments that coded threat levels in after-dream reports. She found that gamers experienced less or even reversed threat simulation (in which the dreamer became the threatening presence), with fewer aggression dreams overall.

In other words, a scary nightmare scenario turned into something "fun" for a gamer.

"What happens with gamers is that something inexplicable happens," Gackenbach explained. "They don't run away, they turn and fight back. They're more aggressive than the norms."

Levels of aggression in gamer dreams also included hyper-violence not unlike that of an R-rated movie, as opposed to a non-gamer PG-13 dream.

"If you look at the actual overall amount of aggression, gamers have less aggression in dreams," Gackenbach said. "But when they're aggressive, oh boy, they go off the top."

The gamer dream experience of high aggression levels matched with little or no fear inspired Gackenbach to pursue a new study with Athabasca University in Canada. If gaming can act as a semi-protective function against nightmares, she reasoned, maybe it could help war veterans who experience post-traumatic stress disorder (PTSD) after enduring combat.

"I don't think anyone has looked at whether there's been a protective function," Gackenbach said. "It makes a lot of sense, but it's a hypothesis."

Psychologists consider nightmares as one of the symptoms of PTSD, and studies have shown incredibly high rates of nightmares ranging from 71 to 96 percent among PTSD patients. By contrast, just 3 to 5 percent of civilians reported the same levels of nightmares.

Virtual reality simulators have already been used to help PTSD patients gradually adjust to the threatening situations that plague their waking and sleeping thoughts. If Gackenbach's hunch is correct, perhaps video games could also help relieve the need for nightmares.

Gackenbach hopes to someday get a sleep lab and perhaps a virtual reality lab to verify her results, even if studies about video games and dreams have not proven the highest priority for receiving funds. Yet studying video games has attracted more interest and respect from colleagues than studying just dreams alone, she has noticed.

Some of Gackenbach's latest work includes studying the violence levels in games, based upon the video game ratings given out by the Entertainment Software Rating Board, and seeing what effect they have upon aggression within dreams.

Any military personnel or veterans interested in the Athabasca University study on the military and gaming can e-mail jayneg@athabascau.ca to find out how to participate.