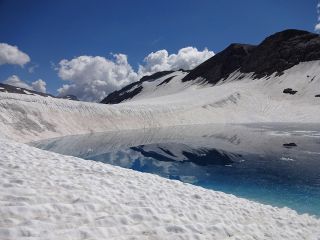 The glaciers that cover the European Alps could disappear by 2100 if human-caused global warming greatly increases over the next several decades, according to new climate models.

"In a bad case, everything will almost be gone," Harry Zekollari, a climate scientist with the Swiss Federal Institute of Technology in Zurich, told reporters Tuesday (April 9) at the annual meeting of the European Geosciences Union (EGU) in Vienna.

Even if humans manage to prevent further global warming, the glaciers will still lose half their volume by 2050, Zekollari and his colleagues found. The researchers simulated the evolution of nearly 4,000 individual glaciers in the European Alps with a new computer model. Scientists used 2017 as their baseline year, with the glaciers starting out at a volume of about 24 cubic miles (100 cubic kilometers), or the equivalent of 40 million Olympic-size swimming pools. [Time-Lapse Images of Retreating Glaciers]

The researchers looked at how the glaciers would change based on different global warming scenarios outlined by the U.N. Intergovernmental Panel on Climate Change (IPCC) in 2013, known as representative concentration pathways, or RCPs.

The researchers found that about 95% of the ice would disappear under the most pessimistic warming scenario, RCP8.5, which projects that the global temperature average could rise by up to 8.6 degrees Fahrenheit (4.8 degrees Celsius) by 2100.

This would mean "you just have some disconnected ice patches at high elevation, but you don't really have any glaciers anymore," Zekollari said during the press conference.

Even under a more-intermediate warming scenario — RCP4.5 — 80% of the glacier volume would vanish, with no glaciers at all below an altitude of about 8,200 feet (2,500 meters), the study found.

Under a more limited emissions scenario known as RCP2.6 (a rise of less than 3.6 F, or 2 C), about one-third of the present-day glacier volume would remain in 2100. That's the "mini good news" of the report, Zekollari said, as it's better than the other scenarios but still greater loss than previously estimated.

Whichever global warming scenario plays out in the next few decades, the glaciers will shrink by half by 2050, because glaciers have a slow response time, Zekollari explained. [See Photos of the Vanishing Glaciers in Europe's Alps]

"The way they're going to look in the coming decades is in fact dictated by how they look now," he said.

Vanishing glaciers will affect the water supply, the hydroelectric power industry and the tourism industry in the Alps, Zekollari said.

"Unfortunately, the situation in the Alps is characteristic for what happens to mountain glaciers outside of the polar regions," Daniel Farinotti, the senior author of the study, also from the Swiss Federal Institute of Technology, told Live Science.

Earlier this year, Farinotti published another study in the journal Nature Geoscience that compiled data on ice thickness from more than 200,000 glaciers to get a global census of ice volume, excluding the ice sheets in Greenland and Antarctica. That study found that the total volume of glaciers around the world is about 38,000 cubic miles (160,000 cubic km), about 18% less than previous studies had estimated, meaning that many glaciers could disappear sooner than expected.

The new findings were published April 9 in EGU's journal The Cryosphere.