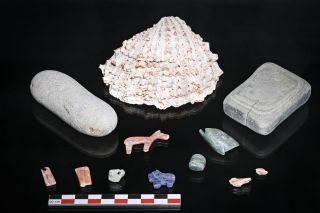 The researchers discovered semi-precious stone artifacts, including a lapis-lazuli puma figurine, at the bottom of the lake.
(Image: © Courtesy of Teddy Seguin)

A team of archaeological divers has uncovered dazzling treasures at the bottom of Lake Titicaca, including a puma carved out of the blue gemstone lapis-lazuli, gold medallions and a turquoise stone pendant.

These riches were likely offered to supernatural deities hundreds of years ago by elite people from the Tiwanaku culture, which established the first large state in the Andes Mountains from about 500 to 1100, the researchers said.

But these swanky goods weren't the only lavish aspect of the offering; it appears the Tiwanaku boated to a small rock outcrop near the middle of Lake Titicaca — essentially a tiny island, which is now underwater — and presented the offerings there, the researchers said. [Photos: Diving for Ancient Offerings in Lake Titicaca]

It's easy to see why this tiny island would have been an attractive spot for ritualistic offerings, said Christine Hastorf, a professor of anthropology at the University of California, Berkeley, who wasn't involved with the study. After all, it would have been the closest piece of land to the center of the vast lake.

"I could see why it would be the sacred of sacreds," Hastorf told Live Science. "You would be the most into the lake and still standing on something, if you could stand on that little [island]."

Divers have known for decades about the treasures at the bottom of Lake Titicaca — the highest large lake in the world, which straddles the boundary between Peru and Bolivia. The first discovery came in 1977, when amateur Japanese divers in Bolivia discovered a rocky area known as Khoa Reef by the Island of the Sun in Lake Titicaca. The reef held amazing artifacts: fragments of ceramic incense burners shaped like cats and offering boxes holding miniature figurines fashioned from the shells of Spondylus, a thorny oyster.

Follow-up diving expeditions in 1988 and 1989-1992 at Khoa Reef recovered an incredible 385 artifacts, including llama bones, ceramics, stone, gold and silver. Some of the artifacts were Inca in origin (the Inca considered Lake Titicaca to be the center of the cosmos and the origin of humankind, so it's no surprise they made offerings to it), but others clearly belonged to the Tiwanaku.

However, because the rocky reef had accrued sediment and shifted over time, study lead researcher Christophe Delaere, an archaeologist at the Oxford Centre for Maritime Archaeology at the University of Oxford, in England, and his colleagues decided to do a systematic excavation of the site.

In 2013, dives to the lake's bottom paid off — they found a wealth of riches, which shed light on the Tiwanaku's religious beliefs and rituals, said study co-researcher José Capriles, an assistant professor of anthropology at Penn State University. For instance, the discovery of charcoal at the underwater site suggests the Tiwanaku were burning some of the offerings, he said.

In addition to the cat incense burners, they found metal ornaments — including gold medallions engraved with the Tiwanaku ray-faced deity — and semiprecious stone artifacts. The divers also found bones from domesticated llamas (Llama glama). The artifacts had radiocarbon dates from 794 to 964, a time corresponding to the Tiwanaku state, the researchers said.

The reef also held bones of water birds, including teals and cormorants, as well as frogs, killifish and catfish. Some of these animals likely weren't sacrificed, and they probably died there naturally, Capriles said. But other animals may reveal ancient trade routes. For instance, the Spondylus shells likely came from the warm ocean waters off the Ecuadorian coast, nearly 1,240 miles (2,000 kilometers) away, the researchers said. [Andes: World's Longest Mountain Range]

The study is "spectacular" because it included three systematic excavations "instead of just randomly picking up things from underwater, which is what we had previously," Hastorf said. Moreover, the findings show the diversity of materials the Tiwanaku deemed worthy enough to offer to the gods, she said.

Even today, the indiginous Aymara people of the Andes regard the lake as having mystical powers, said Hastorf, who does archaeological research along the shores of Lake Titicaca. "I myself have given a gift to the lake," she said. Years ago, her young son fell into the lake. He was rescued, but he later got a cold.

Hastorf continued, "These offerings make lots of sense to me. The spiritual leaders would have gone there [to Khoa Reef] with miniatures. They're giving smoke [from burnt offerings] to the sky, and they're giving [these figurines] to the lake.

The study was published online today (April 1) in the journal Proceedings of the National Academy of Sciences.