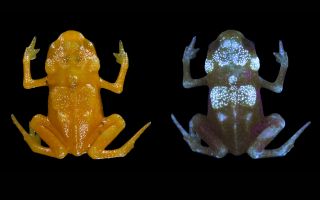 In eastern Brazil's Atlantic Forest, poisonous "pumpkin toadlets" use their vivid colors to warn off predators. But these tiny frogs also broadcast a secret visual signal: They glow bright blue under ultraviolet light.

Scientists unexpectedly discovered the glowing patterns in two species of pumpkin toadlets (Brachycephalus ephippium and B. pitanga) while investigating the tiny frogs' mating calls. To the human eye, the frogs appear orange, red or yellow in natural light.

But when researchers shone a UV lamp on the frogs, blue patterns emerged on the toadlets' heads, backs and legs. [In Photos: Cute and Colorful Frogs]

Fluorescence is extremely rare in land animals with backbones, and while scientists don't know how the pumpkin toadlets use their glow, it may help them to recognize prospective mates or protect them from predators, the researchers reported in a new study.

Unlike bioluminescence, in which chemical reactions in an animal's body generate light, fluorescence won't work in complete darkness. In fluorescence, special molecules absorb light and then emit it at longer wavelengths, creating a glow that usually shows up in shades of red or green.

Corals, scorpions and a rare type of sea turtle fluoresce; in 2018, scientists discovered that chameleons fluoresce, too. Another team of researchers found in 2017 that two species of South American tree frog had fluorescent skin, according to the authors of the new study. However, the pumpkin toadlets' glow is more like that of chameleons, originating in the animals' bones.

In fact, bony plates on the toadlets' head and back were "exceptionally fluorescent," though chemical analysis would be required to identify the compounds that lend the frogs their intense shine, the scientists reported.

How does glowing benefit the toadlets? There's no evidence yet to suggest how the frogs use their glow, but it may serve as an extra warning to predators about the frogs' toxic coating, as some birds and spiders can see fluorescence in natural light, lead study author Sandra Goutte told Live Science. Goutte is a postdoctoral associate at New York University Abu Dhabi in the United Arab Emirates.

Another possibility is that the tiny frogs use their glow to communicate with each other. Pumpkin toadlets lack a middle ear, so they can't hear themselves calling; it's possible that a glowing signal helps them with mating success or allows the frogs to recognize their own species.

"But that's only true if the frogs can see it," Goutte said. "And we don't know if they do."

The findings were published online today (March 29) in the journal Scientific Reports.