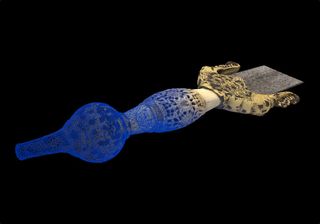 In 1483, warlord Ali Atar died at the Battle of Lucena in Córdoba, Spain; it was there that his Nasrid sword was taken from him.

Now, more than 500 years later, researchers have digitally re-created the handle of the magnificent sword in 3D so that any curious soul can go online and look at the weapon. Lord of Zagra, in Grenada, Atar was the father-in-law of the Sultan of Granada, King Boabdil. Boabdil was the last sultan of the Nasrid dynasty (the last Muslim dynasty of the Iberian Peninsula), which ruled Grenada from 1230 until 1492.

In April of 1483, Boabdil, with the help of Ali Atar, attempted to capture the Christian city of Lucena, but they were defeated — and the sword taken by the enemy. Ali Atar died in battle at the age of 90 and Boabdil was captured, according to a statement.

Atar's sword, which now resides in the Toledo Army Museum in Spain, is adorned in gold, precious stones and metals, with an iron, dome-shaped knob. Decorations and inscriptions on the sword include animal heads and arabic letters. [10 Epic Battles that Changed History]

But you don't need to book a plane ticket to see it.

To create a 3D rendering of the sword, researchers at the Polytechnic University of Valencia and the company Ingheritag3D snapped a bunch of photos from different angles. Then, the researchers used photogrammetry, a method that takes measurements from photographs, to generate a digitized version. The handle of the sword can now be examined inside and out, all online.

"A resource as valuable as cultural heritage can no longer be satisfied with physical conservation," co-author José Luis Lerma, a professor in geodesy and cartography at the Polytechnic University of Valencia, said in the statement. "It must be complemented by exhaustive digital preservation."

The researchers published their results today (March 27) in the Virtual Archeology Review.