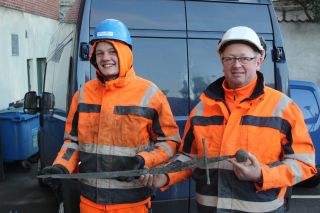 Pipe layer Jannick Vestergaard and engineer Henning Nøhr could barely believe their eyes when they discovered a medieval sword during a sewer evacuation in Aalborg, Denmark.
(Image: © Nordjyllands Historiske Museum)

A sharp sword lodged deep within a sewer caught the eye of a pipe layer and an engineer working in Aalborg, Denmark, on Tuesday (Feb. 5). After showing it to archaeologists, the two could hardly believe their luck.

The double-edged sword — a deadly, 3.6-foot-long (112 centimeters) weapon — likely belonged to an elite warrior in medieval times, during the 1300s, according to archaeologists from the Historical Museum of Northern Jutland.

And that warrior likely paid a pretty penny for the weapon. [In Photos: Early Medieval Village Discovered in Denmark]

"Acquiring a sword in the Middle Ages was an extremely costly affair, and only the warrior elite — who then consisted of the nobility — could afford to carry such a weapon," the museum said in a translated statement.

Pipe layer Jannick Vestergaard and engineer, or operator, Henning Nøhr from the contractor Gunnar Nielsen A/S found the sword in the neighborhood of Algade, but it will forever be a mystery how the warrior lost the blade. Perhaps he dropped it in the mud during a military attack on Aalborg, which is now the fourth largest city in Denmark, archaeologist Kenneth Nielsen said in the statement.

Nielsen added that although the sword was found within a layer of the sewer's waste, during medieval times, that layer sat "on top of the oldest of Algade's old pavements."

Whoever crafted the weapon made a recess, known as blodrille (Danish for "blood groove"), on both sides of the blade. But despite its name, the blodrille wasn't created to provide a path for blood to stream. Rather, the groove helped make the 2.2-lb. (1 kilogram) sword light and narrow, the archaeologists said.

The sword also has a disc-shaped knob (known as a pommel) on its hilt and a straight cross guard, the metal bar that runs perpendicular to the blade and would have protected the fighter's hand. Archaeologists still have mixed opinions on the sword's exact age, but a sword smith may have crafted it as early as the 1100s, meaning it had already been around the block before its last hurrah in the 1300s.

Battle scars on the sword support this idea, indicating that the weapon was used at least three to four times in battle before it was lost, the archaeologists said.

It's rare to find an elite sword on the street, given that most of the ancient high-status weapons are found in graves, the archaeologists said. They noted that the sword was found a mere 65 feet (20 meters) away from St. Peder's Cemetery but that no human remains were found by the weapon.

Archaeologists plan to keep abreast of ongoing sewer excavations, just in case any more artifacts are unearthed. In the meantime, the sword will be cleaned, preserved and then put on display at the Aalborg Historical Museum.

This isn't the only ancient sword recently discovered in Scandinavia. In 2018, an 8-year-old girl fished a 1,500-year-old sword out of a lake in Sweden, Live Science previously reported.