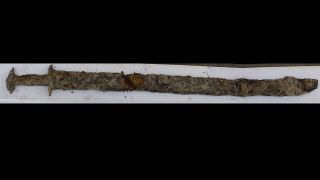 This 1,500-year-old sword predates the Vikings. An 8-year-old girl retrieved it from a shallow lake in Sweden earlier this summer.
(Image: © Jonkoping County Museum)

It was a beautiful summer day in Småland, Sweden, when Andy Vanecek heard the words every father wants to hear.

According to a report on the Swedish news site The Local, Andy and his 8-year-old daughter Saga were wrapping up a day at Vidöstern lake, near their summer home, when the girl reached underwater and felt something hard and metallic greet her fingers. She pulled the mystery object from the lake and found it had a handle, a scabbard and a long, rusted blade. She thought it was a Viking sword — but a call to the local history museum revealed it to be much older.

"The sword is now presumed to be around 1,500 years old," Mikael Nordström, head of archaeology, conservation and preservation at Sweden's Jönköping County Museum, told Live Science in an email.

To answer your first question about this modern Norse epic: No, pulling a sword from a lake does not automatically make Saga Vanecek the Queen of Sweden. According to The Local, Saga moved to Sweden from Minnesota only a year ago — plus, Sweden already has a Queen (and her daughter is next in line).

To answer your next question: Nobody really knows how the sword got there in the first place — or much about it at all.

According to Nordström, the weapon is estimated to date to the fifth or sixth century (the Viking era began around the late eighth century), is about 2.8 feet (85 centimeters) long and was found encased in a scabbard made of leather and wood. The sword is remarkably well-preserved for a hunk of metal that's been sitting in a lake for, presumably, 1,000-plus years.

"Why it has come to be there, we don't know," Nordström told The Local. "When we searched a couple of weeks ago, we found another prehistoric object; a brooch from around the same period as the sword, so that means — we don't know yet — but perhaps it's a place of sacrifice."

A third expedition to the lake turned up a coin from the 18th century (oh, Europe!), but so far, no other pre-Viking artifacts.

Whatever secrets The Sword in The Lake holds will likely unfold slowly. According to The Local, Saga generously donated the sword to the Jönköping County Museum, where experts will work to conserve it for about a year before eventually putting it on display. For now, the investigation of the Vidöstern lake area continues, and young Saga will have to content herself with being Queen of Our Hearts, at least for today.