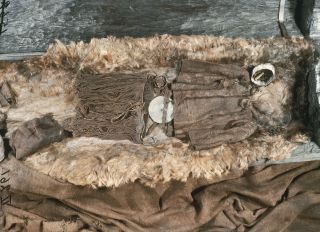 A reconstruction of the tomb of the Egtved Girl, which was discovered in Denmark in 1921.
(Image: © DEA PICTURE LIBRARY/De Agostini/Getty Images)

Two Bronze Age women — one likely a teenage priestess — probably didn't travel far and wide across Europe, as previous research suggested, but instead were real homebodies who likely never left what is now modern-day Denmark, a new study finds.

In two previous studies, researchers analyzed isotopes (an element that has a different number of neutrons than normal in its nucleus) in the women's remains, so they could piece together where the women had lived. But now, new research finds that these analyses were likely contaminated by modern agricultural lime.

"Using strontium [isotopes] to trace prehistoric people should therefore be done with great care and a good understanding of the land use," said study co-researcher Rasmus Andreasen, an isotope geochemist at the Department of Geoscience at Aarhus University in Denmark. "Otherwise, you can end up with wrong conclusions." [In Images: The Bronze Age Burial of a Cultic Priestess]

However, the researchers of the original studies are standing by their work.

"Overall, there is nothing in the study from Aarhus which changes our interpretation: That the two women from the Bronze Age came from afar," Karin Frei, a professor of archaeometry at the National Museum of Denmark, and Robert Frei, a professor of geology and geochemistry at the University of Copenhagen, told Live Science in an email. "In addition, other recent European studies, based on, among others, ancient DNA and strontium isotope investigations, also point to a high degree of mobility of humans in Bronze Age Europe."

Both Bronze Age women are well known by archaeologists; the remains of Egtved Girl (the possible priestess) and Skrydstrup Woman were found in Denmark in 1921 and 1935, respectively. More recently, the Freis and their colleagues found that both women were first-class travelers, results they reported in journals in 2015 and 2017. They found that Egtved Girl spent her early years outside of Denmark, likely in southern Germany, and traveled back and forth between Denmark and another country (likely her birthplace) during the last two years of her life before dying at around age 18 in what is now known as the village of Egtved, Denmark.

Meanwhile, Skrydstrup Woman likely came to Denmark around age 13, and was buried at a mound at Skrydstrup when she died four years later.

But something didn't add up, so Andreasen and study co-researcher Erik Thomsen, an associate professor emeritus of geoscience at Aarhus University, decided to dig deeper. "We felt it odd that the maps of strontium distributions on which these conclusions were based show no resemblance to the underlying geology," Andreasen told Live Science. "We set out to test if modern-day farming could be the reason that the natural strontium variations were obscured." [Photos: A Bronze Age Burial with Headless Toads]

When a person drinks and eats local water and food, they consume the isotopes in these substances that are unique to each area. These isotopes then become a part of that person's teeth, bones and hair. So, by testing these isotopes, researchers can figure out where ancient people were born and lived.

However, researchers need accurate maps of each region's isotopes before they can match it to the isotopes found in ancient people. So, the researchers of the new study looked at strontium isotopes in the environment. They found that strontium-rich, agricultural lime, which farmers use for soil improvement, affects the underlying strontium signature, and "does not reflect the prehistoric levels," Andreasen said.

When the researchers applied isotopic values that were unaffected by agricultural lime to the isotopes found in Egtved Girl and Skrydstrup Woman, they got very different results than the prior studies. "It is most plausible that these individuals originated close to their burial sites and not far abroad as previously suggested," the researchers wrote in the study. In fact, these women possibly stayed within 6.2 miles (10 kilometers) of their burial spots, the researchers found.

Moreover, they noted that the situation in Denmark is not unique. "In areas with farming, one should be very careful when using strontium isotopes to trace the origin and movement of prehistoric people," Andreasen said.

But this argument doesn't sway the Freis. Karin Frei called their interpretation "over-simplistic," and Robert Frei said that soon-to-be published research of 1,200 soil samples from all over Europe show "no statistical difference between the bioavailable strontium isotope composition in soils from agricultural and non-agricultural land."

The study was published online March 13 in the journal Science Advances.