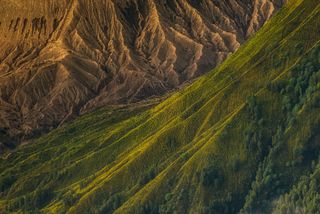 Here, the ridges of Batok and Bromo volcanoes in Indonesia.
(Image: © Copyright by Siripong Kaewla-iad/Getty Images)

Before each of these ice ages, new research finds, collisions between continents and island arcs built long chains of mountains in the tropical latitudes. These mountains may have set the stage for a cooling climate: As they eroded into the seas, they would have altered the chemistry of the ocean so that it could have absorbed more carbon from the atmosphere. Because atmospheric carbon traps heat, less carbon in the skies translates to colder temperatures, allowing ice sheets and glaciers to form.

"This could provide a simple tectonic process that explains how Earth goes in and out of glacial periods," said study co-author Oliver Jagoutz, a professor of geology at the Massachusetts Institute of Technology. [Earth's 8 Biggest Mysteries]

A brief history of ice

During the Phanerozoic Era, which spans the last 540 million years, Earth has been ice-free 75 percent of the time, even at the North and South poles. But the planet has also seen three glacial periods, or ice ages, when at least some permanent ice sheets existed. The first was in the late Ordovician period, 455 million to 440 million years ago, when the first jawed fish were busy evolving. The second was in the Permo-carboniferous, 335 million to 280 million years ago, the age of amphibians and weird mammal-like reptiles such as the dimetrodon. The final ice age is ongoing. It started about 35 million years ago, when the modern-day Antarctic ice sheets first formed.

Smaller glacial advances, like the ice age that ended around 11,700 years ago, aren't the subject of this study. Short advances and retreats of the glaciers have occurred because of variations in Earth's orbit that redistribute the sun's warmth, Jagoutz told Live Science. The perplexing question is why Earth has icy periods, period.

"It seems like the climate state the Earth likes to be in is hotter than today, and these glaciation periods are unusual," Jagoutz said. "And if they are unusual, there must be something specific happening."

Jagoutz and his colleagues believe that "something specific" is the formation of mountain chains in the tropics.

At first blush, it might seem strange that tropical mountains could create an ice age. But the atmosphere, oceans and land are all connected. Continental crust is high in silicate minerals. When these silicate-heavy rocks erode and dissolve into the oceans, they make the seawater more alkaline, or basic. Carbon dioxide from the atmosphere dissolves readily in this alkaline seawater. The more alkaline it is, the more carbon the ocean can hold.

Currently, the human use of fossil fuels is outpacing the ocean's ability to hold onto carbon. Over the past 200 years, seawater has become 30 percent more acidic. Millions of years ago, huge mountain-building events may have done just the opposite, making the ocean more alkaline. Tropical mountains, in particular, would have done the job efficiently. The tropics are wet, so erosion happens quickly, and the rocks pushed up by tropical tectonics are rich in easily dissolvable magnesium and calcium.

The idea that tropical erosion could have influenced the climate was not new, but Jagoutz and his team were the first to gather a database of all the geological records of these major tectonic collisions and compare them to the initiation of ice ages. They found that over the Phanerozoic, the length of active collision areas between oceanic and continental plates — called "sutures" — ranged from zero to 18,640 miles (30,000 kilometers). Each of the major ice ages was preceded by a peak in the length of these active collisions in the tropics, when the sutures were between 6,214 miles and 18,640 miles (10,000 and 30,000 km) long.

"Every time you had an ice age, you had an increased suture zone length in the tropics," Jagoutz said.

The geological traces these ancient collisions leave behind are called ophiolites, which are oceanic, volcanic rocks thrust on top of continental crust. The researchers saw none of these ophiolite extremes in times when Earth wasn't icy. And it was ophiolites in the tropics, or regions at less than 20 degrees latitude, that seemed to matter for cooling the planet.

There are other theories for why Earth has icy periods, Jagoutz said, namely that volcanic activity varies, pumping more or less carbon into the atmosphere. But the data on the history of volcanism doesn't always match up with glacial periods, he said, and the volcano theory offers no good explanation for why ice ages should stop as well as start. The tectonic explanation does a good job of that: Once the calcium- and magnesium-rich mountain chains either erode completely or move out of the tropics via continental drift, their effect on the climate fades, and Earth returns to its typical, balmy state.

Jagoutz and his colleagues have applied for a National Science Foundation grant to further investigate their theory. Whether right or wrong, tropical mountains will not be saving humanity from manmade climate change anytime soon. This mountain-building process occurs over millions of years, Jagoutz said, and has little to do with the kind of variations that determine whether, for example, Miami is habitable or inundated by rising seas. Some researchers, though, have pondered geoengineering schemes that would grind down calcium or magnesium-rich rocks and spread them in the tropical oceans, he said, or inject carbon dioxide into similar rocks.

"People want to use this naturally occurring process to help with manmade climate change, [but[ there are a lots of issue with his, like how do you get this process going on a timescale that is relevant to humans?" Jagoutz said. "That is very difficult."

The research appears today (March 14) in the journal Science.