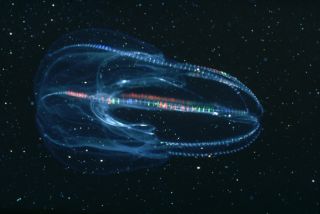 A ctenophore in the genus Mnemiopsis. Where's its anus?
(Image: © Oxford Scientific via Getty Images)

Like a rainbow or a sunset, the anus of the warty comb jelly is a fleeting marvel.

An anus is a gateway for solid-waste removal from an animal's digestive system; in most animals, the anus is reliably found in one location all the time. But Mnemiopsis leidyi, a jellyfish relative that is also known as a warty comb jelly or sea walnut, is not "most animals."

M. leidyi belongs to a group of marine invertebrates called ctenophores (TEEN-oh-fours). Unlike such close relatives as sponges and jellyfish, ctenophores — especially their bodily functions — are poorly understood, Sidney Tamm, a researcher with the Marine Biological Laboratory in Woods Hole, Massachusetts, wrote in the study.

In fact, prior studies had concluded that M. leidyi had a permanent anus. But when Tamm used video microscopy to closely examine M. leidyi larvae and adults, he discovered that their anuses were intermittent, and that the jellies' defecation took place through an opening "which appears and disappears" in a regular rhythm, Tamm reported.

Now you see it; now you don't

After M. leidyi gulps down prey, the meal travels through a six-part digestive system. Eventually, the food ends up in a central stomach that feeds into canals for pooping, which dead-end at the body's surface as lobes, Tamm wrote in the study.

As that lobe reached "maximum volume," a pore opened and released a stream of poo as particles and clumps, Tamm reported. But before the pore opened, the skin of that lobe appeared "uniformly smooth," and there was no sign that the pore had opened there before.

Then, when all the waste had been released, "the pore closed completely and disappeared," Tamm wrote. From start to finish, the entire process lasted from 2 to 3 minutes in M. leidyi larvae and juveniles measuring up to 0.8 inches (2 centimeters) long, and 4 to 6 minutes in adults with body lengths between 1.2 and 2 inches (3 and 5 cm).

The findings were published online Feb. 22 in the journal Invertebrate Biology.