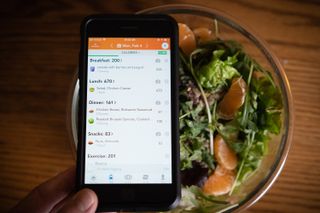 Keeping track of everything you eat and drink during the day can help you lose weight — but despite its effectiveness, people are often reluctant to try it.

However, a new study suggests that monitoring your diet may not be as much work as you think.

The study found that, after six months of diet tracking as part of a weight loss program, participants who lost weight spent just under 15 minutes a day, on average, recording their dietary intake.

The study, published today (Feb. 25) in the journal Obesity, is the first to quantify exactly how much time such dietary self-monitoring actually takes for people who successfully lose weight, the researchers said. [7 Tips for Moving Toward a More Plant-Based Diet]

"People hate it; they think it's onerous and awful, but the question we had was: How much time does dietary self-monitoring really take?" study lead author Jean Harvey, chair of the Department of Nutrition and Food Sciences at the University of Vermont, said in a statement. "The answer is, not very much."

The researchers said that they hope the results motivate more people to try dietary self-monitoring. "It's highly effective, and it's not as hard as people think," said Harvey, who also noted that apps to track food intake are widely available.

The study analyzed data from 142 people who were overweight or obese and took part in an online weight loss program. The program involved meeting weekly for 24 weeks for online group sessions that discussed weight loss strategies — such as goal setting and self-monitoring — and encouraged exercise and a reduced-calorie diet.

Participants also logged on to a website to record their daily food intake. The site also kept track of how long they spent doing the task, and how often they logged in.

"It seems to be the act of self-monitoring itself that makes the difference — not the time spent or the details included," Harvey said.

The researchers noted that because the self-monitoring was done online, their findings apply to electronic self-monitoring and not necessarily pencil-and-paper monitoring. In addition, the study involved people who took part in a weight loss program as part of a clinical trial, so results may not necessarily be the same for people who aren't in a weight loss program.