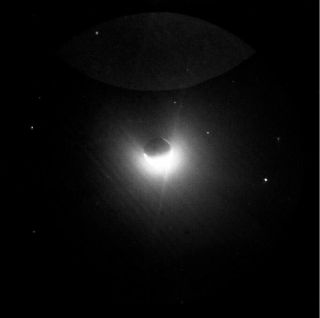 Earth's geocorona seen from the moon during the 1972 Apollo 16 mission.
(Image: © NASA)

The wispy outermost layer of Earth's atmosphere extends much deeper into space than scientists realized — deep enough that the moon orbits through it.

Earth's geocorona is a sparse, little-understood collection of hydrogen atoms loosely bound by gravity to our planet. This atmospheric region is so thin that on Earth we'd call it a vacuum. But it's important enough, and powerful enough, to mess with ultraviolet telescopes due to its habit of scattering solar radiation. And researchers, looking at old data from the 1990s, now know that it extends up to 400,000 miles (630,000 kilometers) above the planet's surface. That's between 10 and 25 percent farther than previous estimates.

One of the reasons the geocorona is so little understood is that it's hard to find a vantage point from which to study it. From Earth's surface and even low Earth orbit, it's more or less invisible. The most famous image of it (pictured above) comes from the 1972 Apollo 16 mission, when the moon, Earth and sun aligned in such a way that astronauts were able to snap a photo of sunlight scattering through it. [Infographic: Earth's Atmosphere Top to Bottom]

For this paper, published Feb. 15 in the journal JGR Space Physics, researchers went back to some data from a European Space Agency (ESA) craft called the Solar and Heliospheric Observatory (SOHO), launched in 1995 to study the sun. That probe launched to a point 930,000 miles (1.5 million km) from Earth toward the sun, where gravity from the planet and stars combined to hold it in place. Though the craft was tasked with studying the sun, on occasion it would turn around and spy on Earth from its distant vantage point.

The point of those studies wasn't to map the geocorona, but researchers realized that the data could be used in that way.

"Data archived many years ago can often be exploited for new science," Bernhard Fleck, ESA SOHO project scientist, said in a statement. "This discovery highlights the value of data collected over 20 years ago and the exceptional performance of SOHO."

Who knows what other knowledge is out there, sitting as archived data on some hard drive, waiting for someone to interpret it correctly.