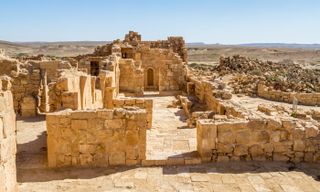 Ruins from the ancient city of Shivta in the Negev Desert in Israel.
(Image: © alfbet/iStock/Getty Images Plus)

The ancient desert village of Shivta in southern Israel made headlines when archaeologists discovered a wall painting there that is thought to show the baptism of Jesus Christ, the earliest representation of Christ known in Israel.

Now, they have found about 140 long-lost artifacts from the village, which showed up in an archive in Jerusalem, after they were left behind in a suitcase more than 80 years ago.

The artifacts from ancient Shivta, in Israel's southern Negev Desert, were rediscovered last year, after researchers investigated a letter from a customs official about a "lost and found" suitcase left at the port of Haifa in 1938. [Photos: The Ancient Ruins of Shivta in Southern Israel]

The researchers found that the suitcase had been filled with small items from archaeological excavations at Shivta in the 1930s. And they tracked down its contents to the shelves of a museum archive in Jerusalem, where they had been overlooked for decades.

The artifacts, which consist of small items like jewelry, door hinges, nails, pieces of glass, objects made from bone, ivory and wood, and shards of pottery inscribed with Arabic and Greek writing, are now on display at the Hecht Museum at the University of Haifa.

Most of the rediscovered artifacts are thought to date from Shivta's Byzantine period, about 1,500 years ago.

They were thought to have been destroyed in a fire at Shivta in October 1938, but the letter from the customs official showed they had already been removed from the site several months before that fire, said University of Haifa archaeologist Michael Peleg, one of the researchers who rediscovered the artifacts.

The director of the 1930s excavations, American archaeologist Harris Dunscombe Colt, had apparently left the suitcase behind at the port of Haifa when he departed the British mandate of Palestine on a ship in January 1938, Peleg told Live Science.

Colt eventually published research on his other excavations in the Negev, but he never published anything about Shivta, Peleg said.

The small artifacts from the excavation have been essential to the research by modern archaeologists site.

"If you want to date any building where you want to do an excavation, you have got to have objects, you have got to have the artifacts," he said. "Basically, the only thing that was left in Shivta was the buildings — but all the finds, what happened, how the excavations were dug, what they found ... nothing was known, until now." [10 Fascinating Biblical-Era Discoveries]

Shivta was originally a Nabatean trading post that became a Christian settlement during the Byzantine era. At a later period, Christian and Muslim communities lived there together, until Shivta was abandoned to the desert sands sometime in the ninth century.

The ancient site was investigated by several foreign archaeologists, including Thomas Edward Lawrence — better known as Lawrence of Arabia — who led an Arab uprising against the Ottoman rule during World War I.

Shivta is now a UNESCO World Heritage site, and it is the subject of renewed excavations and research led by two famed Israeli archaeologists, Yotam Tepper — one of the researchers who recently located the long-lost artifacts — and Guy Bar Oz, both of the University of Haifa.