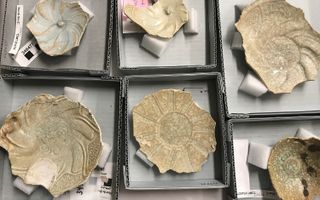 Scientists just blasted pottery from an ancient shipwreck with a "ray gun." Besides being totally sci-fi, the X-ray blaster revealed where the pottery came from.

The wreck was a trade ship dating to the 12th or 13th century that was thought to have departed from Quanzhou in southeastern China, with the Indonesian island of Java as its destination. However, it sank in the Java Sea near Java and Sumatra, taking its cargo to a watery grave. Discovered by local fishermen in the 1980s, the ship and its contents were recovered a decade later, and about 7,500 pieces of its cargo are currently in the collection of The Field Museum in Chicago.

In a new study, researchers addressed a long-standing mystery: where the pottery came from. The artifacts' shape and design suggested they originated in southeastern China — in fact, two boxes described in 2018 even included an identifying stamp. But pinpointing the precise locations where they were made was trickier, as kilns that produce this type of pottery are extremely common in the region, scientists wrote in the study. [In Photos: Ancient Shipwreck's Ceramics Traced to Kilns in China]

To find out, scientists looked at 60 pieces of the wreck’s pottery that were glazed with a blue-white coating called qingbai; that kind of porcelain is fired at such high temperatures that it is rendered almost glass-like, enabling it to spend centuries underwater without much degradation or damage, study co-author Lisa Niziolek, a research scientist in Asian anthropology at the Field Museum, told Live Science.

Lead study author Wenpeng Xu, a doctoral candidate in anthropology at the University of Illinois at Chicago, proposed noninvasive, nondestructive X-ray fluorescence to analyze the composition of the blue-white glaze and uncover the pottery's chemical secrets. Using a hand-held device, similar to a sci-fi ray gun, the researchers collected data from the Java Sea shipwreck pottery, and compared it with pottery debris gathered from four kiln complexes in China, with samples representing several kilns within each complex.

Variations in clay composition or in the ingredients that pottery-makers mix together create differences in finished vessels that can be detected with X-ray technology, by measuring and comparing their energy signatures, according to the study. By blasting the shipwreck ceramics and kiln debris with their ray gun device, the researchers were able to map the once-sunken pottery to the kilns where they were made centuries ago.

They divided the shipwreck pottery into groups and found matches among those groups to kiln complexes in Jingdezhen, Dehua, Shimuling, Huajiashan and Minqing, near the port of Fuzhou.

In fact, their findings suggest that the ship's port of departure was Fuzhou — where most of the shipwreck's pottery originated — and it likely later sailed to Quanzhou to take on porcelain from other kiln complexes, the scientists reported.

The number of kilns linked to the shipwreck's qingbai ceramics suggests that traders and merchants didn't rely on a single manufacturer to satisfy the demand for quality pottery, Xu said. And figuring out the locations where these ceramics came from adds tantalizing details about important trade routes dating to centuries ago.

"We're finding that the scale and complexity of exchange networks is greater than anticipated," Niziolek said. "For people educated to think that large-scale trade networks are only associated with modern Western capitalism, this shipwreck can really challenge those notions."

The findings were published online today (Feb. 8) in the Journal of Archaeological Science.