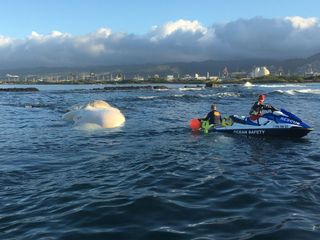 Authorities tried to tow the floating whale carcass away from beaches, but it returned — twice.
(Image: © Hawaii Department of Land and Natural Resources)

An enormous male sperm whale carcass that looks like the world's biggest marshmallow has been haunting the beaches of Oahu, Hawaii, for the past month. Now, scientists are taking advantage of the dead sperm whale's close proximity to the shore and using it as an opportunity to learn more about these large marine mammals.

The floating, bloated white carcass first showed up on Jan. 10 near Oahu's south shore. Twice, authorities towed the carcass out to sea in an effort to keep it away from the beach. "The thinking is that they [whale carcasses] often have sharks feeding on them, and if they get close to a beach, they could get close to shore where people are swimming," said Kristi West, director of the marine mammal stranding program at the Hawai'i Institute of Marine Biology.

But after both tows, just days later, the carcass returned to shore. After the second attempt failed, authorities decided to leave the carcass where it landed, on a remote beach on Oahu's west side that's not frequented by swimmers. [Whale Album: Giants of the Deep]

During its floating journey around Oahu, the whale carcass was in a pretty advanced state of decomposition, appearing like a slightly cooked, puffy marshmallow. That's because the whale's outer layer of gray-colored skin very quickly sloughed off after it died, revealing the top of the whale's thick, white blubber layer, West said.

"When they're [whales] alive and well, you wouldn't see the white," she said. Inside the carcass, gases were released that caused the abdominal cavity to expand outward. "That explains the balloon look."

Bloated, white whale carcasses aren't researchers' favorite form of marine mammals to examine because it means the animal has been dead for quite a while. Not only are they really smelly and kind of gross, but "we can't do all the testing we could do on a really fresh [dead] whale that strands," West said.

Nonetheless, West and her colleagues are doing their best to learn what they can about the animal and why it died. "We've been monitoring it every day," she said.

The whale is positioned right along the shoreline, so during a recent low tide, scientists worked quickly to necropsy the abdomen of the whale. They were most interested in the whale's stomach contents, West said. The researchers found no evidence of plastic or marine debris ingestion, which has been known to cause harm to sperm whales and other whale species around the world. Instead, the whale's stomach was empty, "so that tells us the animal hadn't foraged," West said.

West and her colleagues suspect that the empty stomach means the animal was probably sick when it died. Sperm whales dive thousands of feet to hunt their preferred prey: deep-water squid and octopuses. These marine giants consume about 2,000 lbs. (900 kilograms) of food each day, according to the American Cetacean Society, and it takes a lot of energy to catch that much prey. If this sperm whale wasn't in good health, it wouldn't have had the energy to hunt, West said.

The necropsy also allowed the researchers to take measurements and estimate that the whale was about 55 feet (16.7 meters) long, which is around the maximum size for a male sperm whale, West said. As the carcass continues to decompose, West and her team will examine the whale's bone material to determine if the creature was struck by a ship. But so far, not enough bone has been exposed to definitively say there was a ship strike.

When people come across a dead marine mammal, they should be sure to let authorities know immediately so that researchers can examine the animal as soon as possible, West said. "As the decomposition goes on and on, there's less detailed information that we can gain from these animals that live far out at sea," she said. "We really depend on the public to report them."