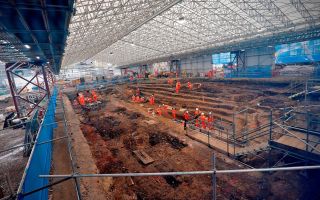 The remains of Capt. Matthew Flinders were found during excavations of a cemetery near Euston train station in London, as part of the HS2 high-speed rail project.
(Image: © Adrian Dennis/AFP/Getty)

Archaeologists working at a London construction site for a high-speed rail line rediscovered the lost grave of Capt. Matthew Flinders, an English explorer who circumnavigated Australia.

A lead plate on the coffin revealed Flinders' identity among thousands of other graves buried near London's Euston station.

"The discovery of Captain Matthew Flinders' remains is an incredible opportunity for us to learn more about the life and remarkable achievements of this British navigator, hydrographer and scientist," Helen Wass, head of heritage for the rail project, known as HS2, said in a statement.

From 1802 to 1803, Flinders led the first expedition to sail around the coast of Australia (then known as Terra Australis Incognita, or the Unknown South Land) and confirmed it as a continent. [The 9 Craziest Ocean Voyages]

Flinders died in 1814, at age 40, and was interred in the St. James burial ground in London. The location of his grave was lost in 1849, when an expansion of the Euston railway station disturbed the burial ground and Flinders' headstone was removed. (An urban legend held that Flinders was buried under Platform 15.)

The St. James burial ground was used in the 18th and 19th centuries, and contains about 40,000 other graves of individuals from a wide swath of London society, from artists and musicians to soldiers and nobility.

"Given the number of human remains at St. James', we weren't confident that we were going to find him," Wass said. "We were very lucky that Captain Flinders had a breastplate made of lead, meaning it would not have corroded. We'll now be able to study his skeleton to see whether life at sea left its mark and what more we can learn about him."

HS2 is a high-speed rail line that, in its first phase, will connect London and Birmingham. The British government has billed the archaeological component of the HS2 project as Europe's largest archaeological dig. More than 60 archaeological sites will be investigated along the rail line, including prehistoric villages, medieval manors and battlefields.

Wass noted that Flinders has a curious connection to archaeology: He was the grandfather of Flinders Petrie, an English Egyptologist who was a pioneer of methodical archaeological excavation.

Strangely enough, Petrie's remains, or at least part of them, had also been lost after his death in 1942. While his body was buried in Jerusalem, Petrie's head was sent to the London Royal College of Surgeons in a jar, as a donation to science. But amid the chaos of World War II, Petrie's head was misplaced in storage and only re-identified in 1989.

The remains of Flinders and the others buried at St. James will eventually be reinterred at a location to be announced.