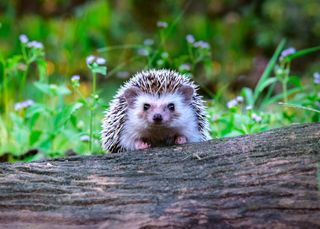 Hedgehogs may look super cute, but the Centers for Disease Control and Prevention (CDC) has a warning for anyone who wants to give one of these spiky furballs a kiss and a snuggle: Don't.

That's because the CDC is investigating a Salmonella outbreak tied to pet hedgehogs, the agency announced on Jan. 25. So far, 11 cases have been identified.

Ill people identified in the outbreak range in age from 2 to 28, with a median age of 12, the CDC said. One individual has been hospitalized due to the infection, though there have been no deaths.

The cases have been identified in eight states: Colorado, Maine, Minnesota, Mississippi, Missouri, Nebraska, Texas and Wyoming, according to the CDC.

Investigators identified the strain of Salmonella, called Salmonella Typhimurium, in three pet hedgehogs in two ill patients' homes in Minnesota, the CDC said. However, a common supplier of pet hedgehogs has not yet been identified, and patients reported purchasing the hedgehogs from various sources, including pet stores and breeders.

Hedgehogs can carry Salmonella in their droppings, even while appearing healthy and clean; these germs can easily spread to their bodies and anything in their living areas, the CDC said. To stay safe while handling a pet hedgehog, don't kiss or snuggle the animals, as this can spread Salmonella germs to your face and mouth. In addition, don't let hedgehogs roam freely in areas of the house where food is present, the CDC said.

Always wash your hands after handling a hedgehog.