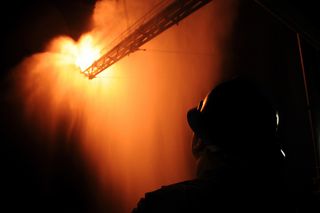 Gas from the damaged Deepwater Horizon wellhead is burned by the drillship Discoverer Enterprise May 16, 2010, in a process known as flaring. Gas and oil from the wellhead are being brought to the surface via a tube that was placed inside the damaged pipe.
(Image: © U.S. Coast Guard/Petty Officer 3rd Class Patrick Kelley)

Cleaning up the mess from the Gulf oil leak could translate into a final tab for BP that soars beyond $10 billion, analysts say, and that doesn't include the lawsuits. But one lawyer believes there could be a better way to collect the money to cover damages from oil spills or related disasters — a type of oil-spill disaster fund paid by an oil tax.

The existing legal process will likely drag on for years and exact even more of a price from everyone involved, based on past scenarios such as the 1989 spill of the Exxon Valdez oil tanker in Alaskan waters. On top of cleanup costs, Exxon paid $3 billion to $4 billion for environmental damages and some $1 billion in payouts to fishermen — but the company fought litigation every step of the way.

"The Exxon Valdez funds are being supervised and dispersed, but it took 20 years, and I don't think that's in anyone's interest," said Jeffrey Rachlinski, a lawyer at Cornell University who specializes in litigation and environmental law.

That oil-spill disaster led to the Oil Pollution Act of 1990, which now holds BP responsible for the full cost of oil removal as leaseholder for the Deepwater Horizon rig owned by Transocean. It also holds both BP and Transocean liable for certain damages resulting from the spreading oil slick.

How much BP will pay

The Oil Pollution Act allows the federal government to hold BP and Transocean responsible for certain damages up to a cap of $75 million, beyond the expected $10 billion or more for oil removal. Such money would go toward helping compensate individuals such as fishermen.

But BP and Transocean could end up paying far more if the investigation of the Deepwater Horizon sinking shows any violations of U.S. federal safety regulations.

Lawmakers in both the U.S. House and Senate have also introduced legislation that would raise the Oil Pollution Act's liability cap to $10 billion, in an effort to recover more money in payment for damages.

And there's no cap in place for damages from lawsuits filed by U.S. states or individuals. In fact, the Gulf Coast fishing industry has already filed four class-action lawsuits.

Individual fishermen can generally sue for certain property losses, including fishing permits or other entitlements, but cannot claim damages based on pure economic loss.

In other words, someone who owns property with marine life contaminated by oil could sue BP. Individuals who have certain property rights based on fishing quota permits could also sue, just as salmon fishermen who operated under fishing quotas in Alaskan waters won lawsuits against Exxon Mobil.

But anyone who suffered lost revenue by simply being unable to use public waters would be out of luck, Rachlinski said. A loose analogy would be a driver being unable to sue someone for causing an accident that led to the closure of a highway used to get to work.

The Oil Pollution Act is meant in part to help compensate those individuals who cannot collect such damage claims based on economic loss.

Still, the oil companies have already begun their legal maneuvering to limit the damages and drag out the process of paying out money. And that could end up costing society dearly, even if new liability changes take effect, Rachlinski said.

"You know what happens when you impose more liability? You get more lawyers working on the problem than engineers," Rachlinski told LiveScience.

Rachlinski suggested that a better future solution might involve creating a federal fund that would help cover damages, based on a tax shared among all oil companies. He pointed out that the legal costs of dueling lawyers exceed any administrative costs of a collective fund that could more efficiently dole out compensation.

The idea is similar to an Oil Spill Liability Trust Fund established by the Oil Pollution Act. That fund placed a 5-cents-per-barrel fee on imported and domestic oil, and went toward helping cover damages and oil removal costs from the Exxon Valdez incident. But that per-barrel fee expired in 1994.

That shared tax would act as some insurance against the fact that oil drilling and exploration represents an inherently risky activity, Rachlinski said. Today it's BP, but it could easily be another oil company tomorrow.

"In a way, this accident is like a bad version of roulette," Rachlinski noted. "When you hear testimony about what [BP and Transocean] did, it's not radically bad behavior."

Such a tax might also reflect a shared responsibility among both oil companies and an energy-hungry public, Rachlinski suggested. U.S. consumers and businesses alike still largely depend upon oil for everyday activities, and so everyone must accept the risks of oil exploration — at least until more sustainable energy solutions ease U.S. oil dependence, Rachlinski said.

"It's politically cheap and expedient to beat up on an oil company that made a mistake, but maybe more sensible to adopt a long term solution," Rachlinski said. "Or maybe it's better to adopt an energy bill. BP's motto is 'beyond petroleum,' right?"