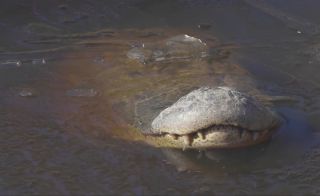 An American alligator sticks its snout out of an icy pond at the Shallotte River Swamp Park in North Carolina.
(Image: © George Howard, The Swamp Park, Ocean Isle Beach NC)

As temperatures dipped along the U.S. East Coast, alligators at a sanctuary park in North Carolina figured out a cute way to survive in their icy homes: They poked their noses out of the water as it began to freeze over, their scaly "snorkels" becoming their only conduit for oxygen.

Several American alligators were spotted this week with their noses breaching the icy water's surface at The Swamp Park in Ocean Isle Beach, in southern North Carolina, which houses rescued alligators in a fenced-off body of water near the Shallotte River.

"The water they are in does tend to freeze on consecutive sub-freezing nights. This does not happen often," said George Howard, the park's general manager. "They do this as a survival technique — a coping mechanism to allow them to breathe in the event the water freezes over." [Alligators vs. Crocodiles: Photos Reveal Who's Who]

Howard spotted the same nose-poking behavior last January at the park during the so-called bomb cyclone.

"This time of year, they are in a process called 'brumation,' kind of like hibernation except they are fully aware," Howard told Live Science. "They lower their metabolism to survive the cold. They don't eat for a few months, until the temps get up to 70 [degrees Fahrenheit; 21 degrees Celsius] and above."

During brumation, an alligator's metabolism slows down, allowing the reptile to go without food and just "chill" for four to five months.

They can't let their bodies get too cold, however, or they will die. American alligators (Alligator mississippiensis), a member of the order Crocodilia, are cold-blooded animals, so they essentially take on the temperature of their surroundings. That's why they bask in the sun, using the heat to get toasty, and why they can't live too far north in the U.S.

When air temperatures drop below about 70 F, the reptiles sometimes dig out muddy underwater dens to keep warm. They can also apparently stay submerged in water with only their snouts sticking above the surface for hours to a few days, said Greg Skupien, of the North Carolina Museum of Natural Sciences, who cited research published in the 1980s.

In a study published in 1982 in The American Midland Naturalist, researchers from the Savannah River Ecology Laboratory found that an alligator in an iced-over pond in South Carolina kept a breathing hole in the 0.6-inch-thick (1.5 centimeters) ice for several days, though the animal later died because its body got too cold, dropping to 39 F (4 C).

Scientists reported on a similar behavior in 1983 in the Journal of Herpetology, describing a "'submerged breathing' posture in which the snout broke the water (i.e., ice) surface, while the remainder of the head and the body angled back down into the den."

Though Skupien, curator of the Naturalist Center at the museum, has never witnessed the so-called icing response, he told Live Science that the behavior is "as weird as it gets for alligators."

He added, "There are other reptiles and amphibians that exhibit some pretty cool overwintering strategies, such as frogs that produce cryoprotectants (i.e., antifreeze) and turtles that can essentially breathe from their butts (i.e., cloacal respiration)."