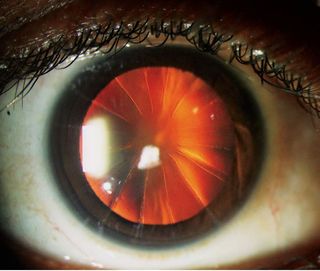 A woman's eye exam revealed 16 cuts on her eyeball arranged in a radial pattern, due to a now-outdated eye surgery. (The fiery-red appearance of the woman's pupil is simply due to the red-eye effect in the photograph.)
(Image: © The New England Journal of Medicine ©2019.)

The faint cuts in the woman's eyeball look like spokes on a bicycle wheel, or a poorly-sliced pizza — numerous thin lines arranged to form a radial pattern. But these cuts aren't due to some kind of new eyeball tattooing. They are the result of a once popular, but now outdated, eye surgery the patient had years ago to correct her nearsighted vision, according to a new report of the case.

Doctors spotted the odd-looking incisions during a relatively recent eye exam. The 41-year-old woman had told the eye doctors that her vision had gotten progressively worse over the past two decades, according to the report, published yesterday (Jan. 23) in The New England Journal of Medicine.

The exam revealed 16 incisions in a radial pattern on her cornea — the clear, dome-shaped surface that covers the front of the eyeball. These incisions are hallmarks of a type of eye surgery known as a radial keratotomy. Indeed, the patient confirmed she'd had this surgery 23 years earlier, according to the report, led by Dr. Muralidhar Ramappa of LV Prasad Eye Institute in Hyderabad, India. ['Eye' Can't Look: 9 Eyeball Injuries That Will Make You Squirm]

Radial keratotomy was a popular procedure in the 1980s and 1990s for treating nearsightedness (myopia), before the development of laser eye surgery.

For the procedure, doctors used a blade to make radial incisions in the cornea, said Dr. Michael Nejat, an ophthalmologist at Staten Island University Hospital in New York who was not involved in the case. "You'd make these radial slices, like you would in cutting a pizza," Nejat told Live Science.

The incisions result in a flattening of the cornea, Nejat said, and for a person with nearsightedness, this helps them see better without glasses.

In the current image, the fiery-red appearance of the woman's pupil is simply due to the red-eye effect, which occurs when light bounces off the back of the eye. The photo was likely taken this way to more clearly show the radial incisions on the cornea, Nejat said.

But radial keratotomy was tied to a number of complications. "That's why we don't do it anymore," Nejat said.

Overlapping incisions or ones that get too close to the center of the eye may result in reduced sharpness of vision, and scars on the cornea could lead to patients seeing glare and halos around objects, the report said.

In addition, although patients may initially see improvements after the surgery, over time, the cornea may keep flattening, which results in overcorrected vision, Nejat said.

Indeed, in the current case, the patient's vision had shifted to become more farsighted.

The patient received a new prescription for corrective lenses, and 6 months later, her vision had not deteriorated further, the report said.