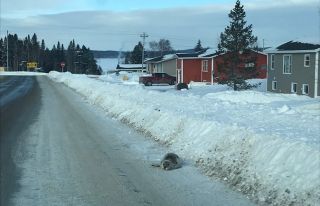 A seal is stranded on a road in Roddickton, N.L.
(Image: © Brendon FitzPatrick)

An icy town in Newfoundland is dealing with some surprise visitors: a pod of around 40 harp seals.

The seals are stuck 4 to 5 miles (6 to 8 kilometers) from the ocean, according to local fishing guide and bar owner Brendon FitzPatrick, who shared photographs of the animals on Twitter. The animals likely swam into inland bays and streams chasing fish and got disoriented, FitzPatrick wrote on Twitter, adding that this is the highest number of seals seen on shore in the area.

"In the beginning, they were kind of aggressive," Sheila Fitzgerald, the mayor of Roddickton-Bide Am, told NPR. As the days have dragged on and the fish in the town's brooks have become less plentiful, the seals have become more lethargic, Fitzgerald added.

Roddickton-Bide Am is a town of just under 1,000 people situated near the northern tip of Newfoundland. The area is a common wintering site for harp seals. Officials from Canada's Department of Fisheries and Oceans (DPO) told the newspaper The Northern Pen that there is little offshore ice near northeastern Newfoundland this year, possibly part of the overall trend of major Arctic melting. With limited sea ice to rest on, the seals may be hauling out closer to the coast, which makes them more vulnerable to following streams inland and getting stuck when streams and bays ice over.

DPO officials are now in town to respond to the seal crisis. The grayish-white animals blend in with snowy roads, the mayor told NPR, and two have already been hit by cars. Locals can call the DFO to relocate seals that are in precarious positions or to report humans harassing the lost seals, the agency announced on Twitter.