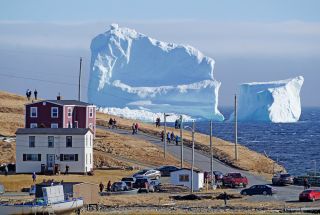 Huge icebergs, some so massive they dwarf nearby buildings, are drifting along the coasts of Newfoundland and Labrador in Canada, creating an awe-inspiring sight for locals and tourists alike.

Iceberg-watching by the aptly named Iceberg Alley is a seasonal hobby for many people. Normally, there are about 80 iceberg sightings in North Atlantic shipping lanes in April, when iceberg season begins, but this month, more than 600 of the massive objects have already floated by, the International Ice Patrol of the U.S. Coast Guard in New London, Connecticut, told The New York Times.

One iceberg, in particular, caught people's attention. It towered 15 stories above the water, an amount that accounted for just 10 percent of the object's mass, according to the Times. [Gallery: An Expedition into Iceberg Alley]

Many of these icebergs split, or "calved," off of Greenland's ice sheet, according to the Associated Press (AP). However, it's not entirely clear why so many more icebergs are traveling down the alley this year.

Bystanders have wasted no time snapping photos of the icebergs and posting the shots on social media. The Twitter account "Fresh Tracks Canada" uploaded a photo with a note saying, "#Iceberg near St. John's Narrows, Fort Amherst #Newfoundland, #Canada (by Shawn Hudson via @IcebergQuest)."

Meanwhile, the Sunshine Squad tweeted "a pic from Ferryland Cottages … yes there is a helicopter on the iceberg. …. now this is impressive #newfoundland #iceberg #amazing #canada."

The icebergs may attract curious onlookers, but the objects present a headache for local fishermen. This year, the icebergs have clogged the entrance to the harbor in the provincial capital of St. John's, the Times reported.

"A lot of our fisher folks are just tied onto the wharf, waiting for the ice to move offshore," Barry Rogers, owner of Iceberg Quest Ocean Tours, a Newfoundland tour company, told the Times.

Icebergs made the area famous when one sank the Titanic in the North Atlantic Ocean in April 1912. The International Ice Patrol was formed soon after, and the organization reported that no ship that has followed the group's warnings has struck an iceberg in 104 years, the AP said.