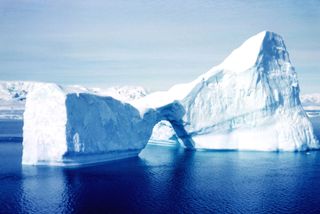 What does a splintering iceberg sound like underwater? Imagine the cracks and pops of an ice cube melting in a glass of lemonade multiplied on a colossal scale, say researchers from Oregon State University, who recorded a thawing berg near Antarctica.

"It turns out there's an unbelievable amount of ice noise," said Robert Dziak, a marine geologist at OSU's Hatfield Marine Science Center. "There are indications that the ice noise we're detecting can be heard as far north as the equator."

Dziak and his colleagues heard the sounds of shattering ice on underwater microphones set out to monitor submarine volcanoes near Antarctica. With a long-standing interest in the natural sounds of the ocean, the team decided to track the sound from a disintegrating iceberg. [Video: Hear the iceberg.]

"Ice breakup is a major component of the ocean sound field, and we want to understand the natural contributions to that sound field," Dziak told LiveScience's OurAmazingPlanet. Establishing the ocean's natural sound levels is an important step in monitoring man-made contributions to ocean noise, he said.

Dziak and his colleagues tracked the enormous berg from its birth in Antarctica's Weddell Sea in 2007 into the open ocean in the Scotia Sea. Their findings were published in the July 2013 issue of the journal Oceanography. During one hour long period, the sound energy released by the fracturing iceberg was equivalent to the sound that would be created bymore than 200 supertankers over the same period, the study found.

The iceberg, about 15 by 35 miles in size (25 to 55 kilometers), created more than one kind of sound. There were harmonic tremors when it hit the ocean floor and got stuck. These continuous, rhythmic quivers are below the range of human hearing. Then, when the ice was drifting at sea and cracking apart, the researchers heard fracturing, which they describe as icequakes. "This is almost like a floating island of ice, so when it breaks apart, it makes really loud noises," Dziak said.

The sounds from melting and calving icebergs add to the ocean's natural cacophony. Along with animal calls, earthquakes, landslides and volcanoes — even waves rolling seafloor pebbles back and forth — produces ocean noise. Scientists are documenting these sounds to better track how man-made noise from ships, military sonar and underwater oil and gas exploration may affect marine life.