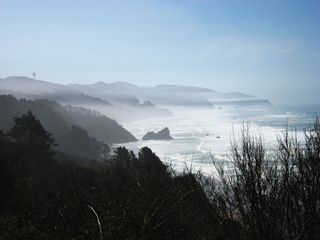 Fog lends a creepy air to the Oregon coast in this 2009 image.
(Image: © Michael Theberge, NOAA)

Poltergeists, witches and ghosts aren't the only source for spooky seasonal mystery. In fact, scientists monitoring the oceans have uncovered a handful of sounds that can't be explained — at least not with any certainty.

With names like "The Bloop," "Train" and "Julia," the sounds have been captured by hydrophones, or underwater microphones, monitored by the National Oceanic and Atmospheric Administration (NOAA). Here are the six most mysterious noises ever heard in the sea, and what might have made them. [Listen to the Six Spooky Sounds]

The decidedly nonspooky nickname for this sound does little to dispel the mystery surrounding it. In 1997, NOAA hydrophones picked up one of the loudest sounds ever recorded off the southern coast of South America: the Bloop (which sounds like, well, a bloop), was recorded by two hydrophones nearly 3,000 miles (4,800 kilometers) apart.

The Bloop mimics marine animal sounds in some ways, but its volume is too great to be made by any sea creatures known to science. If your imagination is running away from you, you're not alone: Plenty of listeners have jokingly linked the Bloop to Cthulhu, a fictional part-octopus monster created by sci-fi writer H.P. Lovecraft in 1928. [Our 10 Favorite Monsters]

Deep-sea monsters aside, NOAA holds the most likely explanation for The Bloop is that it was the sound of a large iceberg fracturing. These "icequakes" have been recorded in the Scotia Sea and sound very similar to the mystery 1997 Bloop. If a cracking iceberg were the source, according to NOAA, it would have likely been floating between the Bransfield Strait and the Ross Sea of Antarctica, or perhaps at Cape Adare in East Antarctica.

This weird noise, which sounds almost like someone cooing or whining, occurred on March 1, 1999. The eastern equatorial Pacific autonomous array (a network of hydrophones) picked up this strange sound.

Like the Bloop, Julia is most likely the sound of ice. In this case, NOAA researchers suspect the hydrophones picked up the sound of a large Antarctic iceberg running into the seafloor.

This sound is like the scratch of branches against your bedroom window, in that it happens again … and again … and again. To the ears, Upsweep sounds like an ambulance wail or perhaps an unearthly creature's howl. It's been picked up by hydrophones seasonally since 1991, peaking in the spring and fall. The source of the sound appears to be an area of undersea volcanic activity, but scientists have yet to pin down exactly what's causing it.

Slow Down, a noise recorded on May 19, 1997, gets its name because it descends in frequency over seven minutes. NOAA scientists have located the source of the sound off the Antarctic Peninsula, leading them to suspect that Slow Down is the result of a drifting iceberg hitting the seafloor and screeching to a ponderous stop. The sound was detected by sensors nearly 3,100 miles (5,000 km) apart.

Train sounds like you might expect a noise named train to sound — like the rub of train wheels against tracks. Recorded in 1997, Train is a steady hum that likely originated in Antarctica's Ross Sea. The suspected culprit? An iceberg dragging its keel along the ocean floor.

Whistle sounds more like a kettle of boiling water than a jaunty tune, but that doesn't make the sound any less mysterious. Recorded in July 1997, Whistle was only picked up by a single hydrophone, making it impossible to pinpoint its source. However, according to NOAA, similar sounds have been recorded coming from erupting submarine volcanoes. It's possible that Whistle, unlike Julie, Slow Down or other mysterious sea noises, may have been caused by fire, not ice — though we won't blame you if you want to imagine it was Cthulhu after all.