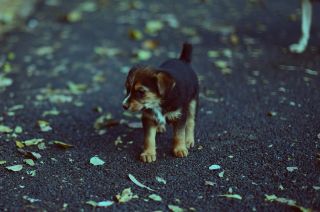 A U.S. woman acquired a rabies infection after being bitten by a puppy while on a yoga retreat in India.
(Image: © Shutterstock)

When a Virginia woman went to the emergency room with shortness of breath, anxiety, sleeping troubles and difficulty swallowing water, doctors thought she was having a panic attack. But her symptoms were actually due to something much rarer: she had a rabies infection — one that would prove fatal — which she contracted from a dog bite while on a yoga retreat in India, according to a new report.

The case marks only the ninth time in the past decade that a person has died from rabies in the U.S. from an infection acquired abroad, according to the report from the Centers for Disease Control and Prevention (CDC).

The tragic case highlights the need for travelers to be aware of the risks of rabies when visiting certain countries and to receive "preexposure" rabies vaccines before travel when recommended, the report said. [The 9 Deadliest Viruses on Earth]

The report is published in the Jan. 4 issue of the CDC journal Morbidity and Mortality Weekly Report.

The 65-year-old woman went on a seven-week yoga retreat in India from January to April 2017. During the retreat, she was bitten by a puppy outside her hotel in Rishikesh, a city in northern India, according to the report. The bite was washed with water, but no other treatments were given.

About six weeks after her return to the U.S., in May 2017, the woman experienced pain and a tingling sensation in her right arm while gardening, which doctors diagnosed as carpal tunnel syndrome. But the next day, she went to the emergency room with panic-like symptoms and was presumed to be having a panic attack, for which she received an anti-anxiety medication.

Only a day later, she was back in the hospital with chest pain, shortness of breath, tingling and numbness in her arm and increased anxiety. A heart examination suggested a problem with blood flow, and she underwent an emergency procedure to thread a catheter through the blood vessels to her heart.

Later that day, the woman became "progressively agitated and combative," and she was seen gasping for air while trying to drink water, the report said. Difficulty swallowing and fear of water (hydrophobia) due to this difficulty with swallowing are symptoms of rabies, according to Mayo Clinic.

That's when doctors asked the woman's family if she had been exposed to any animals, and her husband told them about the puppy bite.

There is a vaccine for rabies, but in order to be effective, it must be given before symptoms appear. Unfortunately, once a person starts to show symptoms of rabies, there is no effective treatment and the disease is almost always fatal, according to the CDC. As a last resort, the Virginia doctors tried an experimental protocol for treating rabies, known as the Milwaukee protocol, which involves giving antiviral drugs. But the woman's condition worsened, and she died shortly after the family decided to withdraw advanced medical support.

During the woman's medical care, she had contact with about 250 health care personnel, and of these, it was recommended that 72 undergo rabies vaccination, mostly due to possible exposure to the virus through the patient's saliva.

Rabies is rare in the United States, with only about one to three human rabies cases reported each year, according to the CDC. And vaccination programs in the U.S. have eliminated the spread of rabies among domestic dogs, meaning that dogs in this country are no longer a "reservoir" for the virus. But rabies remains endemic in more than 120 countries, including India, which has the highest number of human rabies deaths related to dog exposures, the CDC said.

As such, the CDC recommends that U.S. travelers consult a health specialist before their trip to see if they need vaccinations, such as the rabies vaccine. In the current case, the woman did not arrange to have a pretravel health visit, even though a rabies vaccine should have been considered because of the extended length of her stay and her travel to rural areas in India, the report said.

"These events underscore the importance of obtaining a thorough pretravel health consultation, particularly when visiting countries with high incidence of emerging or zoonotic pathogens," such as rabies, the report concluded.