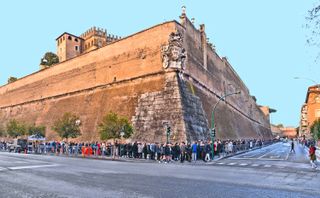 Part of the wall that surrounds Vatican City.
(Image: © Shutterstock)

Any border wall between the United States and Mexico can't be immoral, President Trump said at a Cabinet meeting yesterday (Jan. 2), because the Vatican has one, too.

"When they say the wall’s immoral, well then you got to do something about the Vatican, because the Vatican has the biggest wall of them all," Trump said, according to The Hill.

Trump made similar comments about the Vatican's wall in 2016, prompting a flurry of comments from historians explaining that while Trump's wall would, in theory, keep out migrants, the Vatican's walls were designed for entirely different purposes. [Photos: Ruins of Mysterious Wall Found in Jordan]

They were built to keep out pirates.

In the ninth century, Pope Leo IV announced that Vatican City needed walls to protect it from the Saracen pirates who were pillaging southern Italy. (Saracen is a term from the Middle Ages that refers to Arabs and Muslims.) After the Saracens attacked Rome and the basilicas of Old St Peter's and Saint Paul Outside the Walls in A.D. 846, Pope Leo IV ordered the construction of a 39-foot-tall (nearly 12 meters) wall around part of Vatican City, an independent city-state where the pope lives.

But the imposing wall soon opened up, according to historians.

"Gradually, the Muslim threat receded and many gates were opened in the walls,” Thomas Noble, a papal history expert at Notre Dame University, told the news website Best Life.

Other popes expanded the wall during the 1400s and 1500s, but these stretches were less about defense and more about making "a political and cultural statement" about the pope's power, Gerard Mannion, a Catholic studies professor at Georgetown University in Washington, D.C., told The New York Times.

In the 1500s, Pope Pius IV ordered the wall's grand doors closed again, to protect it not from pirates but from Roman politicians angling for more political clout and the Vatican's riches. "The problem in those later times was that political violence in Rome sometimes threatened the papacy," Noble told Best Life.

Today, the Vatican's walls are an impressive sight. But they don’t keep anybody out; their doors are open and metal detectors are the only obstacle between the public and St. Peter’s Square, according to CNN.

But in medieval times, walls were commonplace. Most major cities — including London, Paris and Jerusalem — had them.

"The walls are a fortification, there is no question, but they were a fortification built at a time when armed invasions by barbarians and other forces were happening," Diane Apostolos-Cappadona, a Catholic studies professor at Georgetown University, told The New York Times. "And that is not the same thing we are talking about with a wall between the U.S. and Mexico."