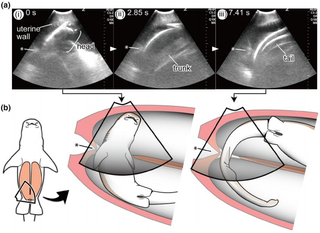 A series of ultrasound images shows a shark embryo swimming from one uterus to another.
(Image: © Ethology)

If you've given birth, you're likely familiar with the strange sensation of a fetus kicking in the womb. Now, try to imagine the feeling of that fetus deciding it was bored with your uterus, flipping itself around, and swimming into another one.

That's something tawny nurse shark moms have to deal with, according to a new paper published Monday (Dec. 17) in the journal Ethology. The researchers used underwater ultrasound machines — a new technology — to study captive, pregnant tawny nurse sharks. (Unlike many other fish, some shark species give birth to live young, not eggs.) The ultrasounds revealed something incredible: shark embryos ducking out of one of a shark's two uteruses and into the other. (Yes, sharks have two uteruses.) More often, however, they'd catch the moving embryos after the fact, when they'd check on a shark and find that the total count of shark embryos in one uterus had gone down, while the count in another uterus had risen by the same amount.

That makes tawny nurse sharks (Nebrius ferrugineus) unusual in the animal kingdom, especially when compared with mammals, which, the researchers noted, can often barely move in the womb before birth. And there are at least three shark species where recent evidence has shown that embryos can move only their mouths. [Image Gallery: Mysterious Lives of Whale Sharks]

This bizarre behavior has been observed only once before, the researchers wrote. In a 1993 documentary that aired on The Discovery Channel, a camera crew witnessed embryos swimming between uteruses through a hole cut in the side of a pregnant sand tiger shark. However, this wasn't conclusive evidence that sand tiger embryos do this regularly, the authors added, because "it is not an observation under natural conditions."

Researchers don't know for certain why tawny nurse sharks or sand tiger sharks would be able to swim around like this in utero, but they have a pretty good guess: Both species feed their not-yet-born young through a process called "oophagy." This means that the embryos gobble up unfertilized eggs inside their mothers as food — and sometimes, the nearest egg is in the uterus next door.

Somehow, this isn't the end of embryonic shark weirdness in this paper:

"Our data also showed that the cervix of the tawny nurse shark sometimes opens," the researchers wrote, "and the embryo exposes its head out of the uterus through the cervix."

In other words, sometimes not-yet-born tawny nurse shark embryos decide to poke their noses out and take a peek at the outside world.

"This phenomenon is in contrast to that seen in mammals where the cervix is tightly closed until birth," the researchers helpfully added.