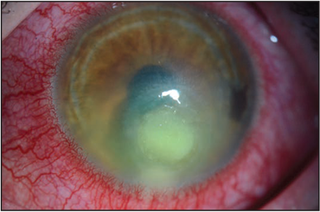 Many contact lens wearers have a dirty little secret: They sometimes sleep or nap in their lenses. But — as Live Science has reported many times before — this bad habit could raise their risk of serious eye infections and even lead to vision loss.

Now, emergency room doctors are taking up the cause, in a new commentary published today (Dec. 19) in the journal Annals of Emergency Medicine.

"Falling asleep, or even napping, without removing your contact lenses can significantly increase the likelihood of serious health problems," Dr. Jon Femling, an assistant professor at the University of New Mexico School of Medicine's Department of Emergency Medicine and lead author of the new commentary, said in a statement. "If you want to avoid infection, and avoid a trip to the emergency department, proper eye care is a must." ['Eye' Can't Look: 9 Eyeball Injuries That Will Make You Squirm]

The commentary refers to a recent report from the Centers for Disease Control and Prevention (CDC) that highlighted the risks of sleeping in contact lenses. The CDC report, which was published in August, described six cases of people who developed serious eye infections after sleeping in their lenses.

The six patients in the report developed a condition called microbial keratitis, an infection of the eye's transparent outer covering (the cornea) caused by bacteria, fungi, amoebas or viruses.

Most of these patients "required months of treatment" to address their infections, and some needed corneal transplants, the commentary said. These infections can be difficult to treat and often require patients to apply antibiotic eye drops every hour for weeks or months at a time.

In one of the cases described in the CDC report, a 34-year-old man reported sleeping in his contact lenses at least three to four nights per week, as well as swimming in his lenses. He developed redness and blurry vision in his left eye and was treated for bacterial and fungal eye infections for two months. But his symptoms didn't get better. It wasn't until later that doctors discovered he had a rare eye infection with a single-celled amoeba called Acanthamoeba keratitis. This amoeba is commonly found in nature, including bodies of water, according to the CDC. The infection requires a specific medication to treat, and doctors should suspect Acanthamoeba infections in patients with eye infections that don't respond to initial treatments, the commentary said.

Once the man received the proper medication, his infection eventually cleared up, but it took six months, and he was left with some vision loss, the CDC report said.

In another case, a 59-year-old man wore his contact lenses overnight during a hunting trip but soon developed eye pain. He was treated with antibiotic drops that he had to apply every 2 hours. But while he was showering one day, he heard a "popping sound" in his left eye and was diagnosed with an ulcer on his cornea. He required a corneal transplant and broad-spectrum antibiotics, and experienced some vision loss.

The CDC also reported the case of a 57-year-old man who wore the same contact lenses for two weeks straight. He was diagnosed with infections in both eyes and had a hole in the cornea of his right eye. He required hourly antibiotic eye drops and a corneal transplant to save his right eye, the CDC report said.

Besides eye trauma, the main risk factor for microbial keratitis is inappropriate contact lens use, the commentary said. "As demonstrated by the cases, extended use outside of recommended guidelines, wearing contact lenses while sleeping, and poor hygiene and disinfection contribute to infection risk."

To prevent eye infections, the CDC recommends the following: