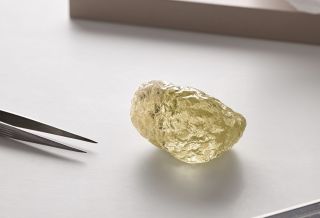 This is now Canada's biggest diamond. Are you impressed?
(Image: © Dominion Diamond Mines)

Miners discovered a 552-carat yellow diamond in the Diavik Diamond Mine in the Northwest Territories this October, Dominion Diamond Mines announced last week. For Canada, that's a big rock: The country's previous size record for a diamond was 187.7 carats. However, for the world, the largest diamond ever found is the Cullinan Diamond, discovered in South Africa in 1905. That rock clocks in at 3,106.75 carats.

For another comparison, the famous Hope Diamond, held at the Smithsonian Institution in Washington, D.C., is 45 carats. It’s famous both for its rare blue color and its alleged habit of bringing misfortune to those who possess it. [Sinister Sparkle Gallery: 13 Mysterious & Cursed Gemstones]

Diamonds typically come from carbon trapped deep in Earth's mantle. Under superhigh heat and pressure, this carbon crystallizes into a shiny, much-coveted gemstone. Deep volcanic eruptions bring the diamonds close to the surface. (Diamonds can form in other ways, such as in large asteroid impacts at the surface, but commercial diamonds typically come from the mantle.)

The Canadian record-breaker is a yellow diamond, which gets its color from nitrogen impurities within the crystal. Yellow diamonds are rarer than white diamonds but were still largely considered a cheaper stone until recent years. According to a 2012 Wall Street Journal article, yellow diamonds began to gain in popularity (and price) around 2010, a trend driven by the high cost of colorless diamonds and the choice by several celebrities to use yellow stones for their own jewelry.

The mine where the stone was found sits 137 miles (220 kilometers) from the Arctic Circle, on an island in a lake called Lac de Gras, where a series of deposits of an igneous rock called kimberlite are studded with diamonds. According to GIA, a nonprofit that evaluates diamond quality, the Diavik mine has produced more than 100 million carats of diamonds since it opened in 2003.

The biggest diamonds on record, however, come from South Africa. The Cullinan was a near-colorless stone that, once cut, yielded two major Crown Jewels of the United Kingdom: the Great Star of Africa (530.4 carats) and the Second Star of Africa (317.4 carats). The former graces the top of a scepter and the latter a crown.

Just this year, the Letšeng mine in Lesotho coughed up a 910-carat colorless diamond, the fifth largest ever found.

It's not entirely clear why South Africa's mines often contain giant gems. However, some research suggests that the biggest diamonds form differently than smaller stones do. One 2016 study found that the composition of giant diamonds differs from that of smaller diamonds. The larger ones tend to have irregular crystalline structures and few inclusions, or nondiamond material, the research found. However, these bigger stones did contain tiny metallic grains not seen in smaller diamonds, suggesting that the big ones may form in small metallic pockets very deep in the mantle.

Editor's Note: This article was updated to indicate that the Letšeng mine is in Lesotho, not in South Africa as had been previously reported.