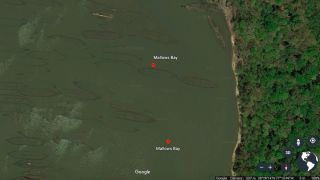 Military shipwrecks dating as far back as the Revolutionary War and including ships from the Civil War and both World War I and World War II were deliberately sunk here at Mallows Bay in Maryland.
(Image: © Google Earth)

WASHINGTON — The history of maritime vessels in the U.S. is preserved in an unlikely place — at the bottom of a river.

Nearly 200 military shipwrecks — dating as far back as the Revolutionary War and including ships from the Civil War and both World War I and World War II — were deliberately sunk over centuries, in an area of the Potomac River called Mallows Bay, in Maryland. Over time, this so-called ghost fleet of wooden ships has come to serve as habitat for local wildlife.

But is this artificial ecosystem stable? Researchers recently investigated how the shipwrecks have changed over time; their findings, presented here on Dec. 13 at the annual meeting of the American Geophysical Union (AGU), explained how the bodies of the ships weathered river conditions — in some cases for hundreds of years — and how that might affect the future of the ghost fleet ecosystem. [Mayday! 17 Mysterious Shipwrecks You Can See on Google Earth]

The four researchers were accompanied at AGU by a chaperone, as they are all fifth-grade students attending the J.C. Parks Elementary School in Maryland. A school trip to Mallows Bay last year inspired them to question how the ships got there and what happened to them after they were sunk, Renata Ashton, age 11, told Live Science.

They consulted aerial maps of the ghost fleet that were created decades apart, "and we looked at them to see which ones had moved and decayed," said Shyla Lancaster, also 11.

After comparing known ship positions across different maps, they discovered that some ships were definitely not staying put — most of the ships were shifting eastward, and some moved as far as 20 miles (32 kilometers) downriver, they reported.

Natural forces that affected the ships included storms, floods and erosion, according to 10-year-old Annabelle Nault. The best-preserved parts of the shipwrecks were deeply embedded in mud, while the exposed parts showed greater signs of deterioration, explained Kharylle Deramos, age 10.

Together, the ships form an elaborate infrastructure that has become a habitat for bald eagles, fish and other animals, and the site is currently under consideration for designation as a marine sanctuary by the National Oceanic and Atmospheric Administration (NOAA).

But degradation and drift could disrupt the balance of this ecosystem. Further evaluation of the site with underwater remotely operated vehicles will help determine how changes in the ghost fleet could impact the wildlife that live there, the researchers concluded.

Editors note: This story was updated to correct the spelling of Annabelle Nault's name.