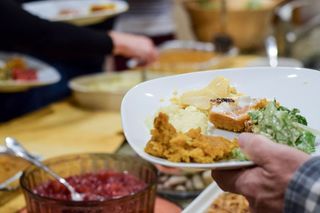 'Tis the season for festivities … and also weight gain. Indeed, holiday parties and large meals with family make it all too easy to pack on the pounds this time of year. But a new study from the United Kingdom suggests that some simple tips, including weighing yourself regularly, can help prevent holiday weight gain.

The study, known as the Winter Weight Watch, examined whether providing people with simple advice to curb eating and drinking over the holidays could prevent weight gain. The results were published today (Dec. 10) in the Christmas issue of the journal The BMJ; the holiday edition features research that is more lighthearted than the journal's usual fare.

The study's 272 participants were randomly divided into two groups. People in one group, known as the intervention group, were advised to weigh themselves at least twice a week during the holidays and to record and reflect on their weight. This group also received 10 tips for managing weight; these suggestions included being careful with portion sizes, limiting alcohol and sugary drinks, and engaging in regular physical activity. [13 Kitchen Changes that Can Help You Lose Weight]

This group also received a list showing how much exercise you'd need to burn off popular holiday foods and drinks. For example, it would take 16 minutes of running to burn off three large roasted potatoes, and a small glass of mulled wine would require 33 minutes of walking.

The other group, known as the "control group," received a leaflet about leading a healthy lifestyle, but this did not include dietary advice or advice specific to the holidays.

The researchers weighed participants once before the Christmas holidays (in November or December) and again about a month later (in January or February).

Although the difference in weight between the two groups was small, it's still important, given that "any weight gain prevented will have a positive impact on health outcomes," the authors said.

The researchers noted that their study has some limitations; the follow-up period was relativity short, and most participants were women who had a healthy weight or were overweight, rather than obese. So, it's unclear how well the findings apply to other groups of people.

Still, "these results should be considered by health policymakers to prevent weight gain in the population during high-risk periods such as holidays," the authors concluded.