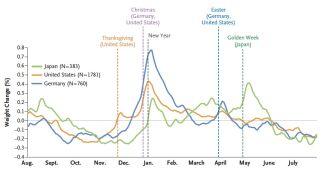 This image shows how people's average weights in three countries — Japan, the United States and Germany — changed over a one-year period.
(Image: © The New England Journal of Medicine © 2016)

Holiday weight gain isn't unique to the United States: A new analysis finds that people in Germany and Japan also pack on pounds during festive seasons.

But unlike Americans, who gain a lot of weight during Thanksgiving, people in other countries put on pounds at other "celebratory" times of the year, according to the study.

In the study, which was published today (Sept. 21) in the New England Journal of Medicine, the researchers gave wireless digital scales to nearly 3,000 participants in Germany, Japan and the United States. [11 Surprising Things That Can Make Us Gain Weight]

Over 12 months starting on Aug. 1, 2012, the people in the study weighed themselves each day. At the end of the study period, the researchers used the scale data to calculate how each participant's weight changed over the course of the year, compared to their starting weights.

People in all three countries gained weight, on average, around Christmas, according to the study. Specifically, people's weight went up in the 10 days after Christmas compared to the 10 days before Christmas, the researchers found.

People's average weights also increased around national holidays in their countries. In Japan, for example, there was an increase in weight during a holiday period called Golden Week, which takes place around the beginning of May.

In addition, Germans saw a sharp uptick in weight around Easter, and Americans around Thanksgiving, the researchers found.

The investigators, led by Elina Helander, a personal health informatics researcher at Tampere University of Technology in Finland, noted that shortly after the holidays, people shed about half of their holiday weight gain; however, the other half appears to remain until the summer or beyond.

To help people avoid gaining weight during this time of year, one approach is to advise patients to have better self-control over the holidays, the researchers wrote. "The less one gains, the less one then has to worry about trying to lose it," they wrote.