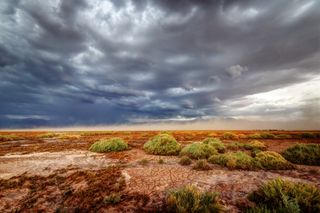 The Atacama desert typically receives less than a half-inch of rain every year.
(Image: © Lukas Bischoff/iStock/Getty Images Plus)

In the summer of 2017, after a freak rainfall, unusual lagoons appeared in the oldest and driest desert on Earth — the Atacama. In an area that usually receives less than a half-inch of precipitation annually, the temporary oases should have been a boon to desert life — but, alas, they weren't. Microbial life in the soil, which had adapted to hyperarid conditions over millions of years, quickly perished.

And they didn't go quietly: Up to 87 percent of the bacteria in the lagoons died after having "burst like balloons" from sponging up too much water in their newly aquatic environment, according to new research published online Nov. 12 in the journal Scientific Reports. Of 16 species identified in arid samples, only two to four survived the deluge to remain in the lagoons. One survivor was a hardy, newly discovered species of bacteria in the salt-loving genus Halomonas.

"Halomonas lives virtually everywhere on Earth — you go to your backyard and analyze the soil, and you'll find them there," said study co-author Alberto Fairén, an astrobiologist at the Center for Astrobiology in Madrid and Cornell University in New York. "They are a microbe highly adapted to salinity, which explains their rapid recuperation and adaptation after the rains to the new saline lagoons." [Extreme Life on Earth: 8 Bizarre Creatures]

The Atacama, sandwiched between the Andes and a coastal mountain range in Chile, has been arid for an astounding 150 million years. In that time, several species of bacteria have become exquisitely adapted to the salty, nitrogen-rich environment, able to rapidly soak up the tiniest bit of moisture. When the heavy rains created flooded lagoons, the bacteria inadvertently sucked water through their membranes faster than their bodies could deal with it. The result: They burst open in what is known as osmotic shock.

The results have implications in the search for alien life. Long ago, the Atacama had more or less uniform deposits of nitrates (an oxygenated form of nitrogen that plants need for growth). Then, 13 million years ago, sporadic rains concentrated the nitrates in valleys and lake bottoms. Mars has similar deposits, and scientists believe they were formed in similar patterns of long, dry stints interspersed with short-term rains.

Given the geologic similarities between the Atacama and Mars, the Atacama has become a common stand-in for the Red Planet; in the past 15 years, over 300 studies have used it as a Martian analogue. Back in 1976, NASA's Viking landers searched for microbes on the Red Planet by incubating Martian soil with water. [Mars-like Places on Earth]

"Judging from how thirsty the microbes in the Atacama were … maybe adding water to samples of Mars' soil was not the best idea," Fairén told Live Science. "If something was alive there, we probably just drowned them."

Since the time of the Viking landers, other robotic visitors to Mars have looked at soil samples. Earlier this year, NASA's Mars Curiosity rover found organic molecules, which, while not providing evidence of life itself on the Red Planet, did point to the possibility of an ancient life form.

"Irrespective of the results of this paper, it is essential for us to sample and return to Earth soil samples from Mars. There are a lot of reactive components that make studying the soil very complicated with remote instruments," said Dawn Sumner, a planetary geologist and astrobiologist at the University of California, Davis, who was not involved with the study.

The Atacama incident in 2017 wasn't the first — abnormal rains were also recorded in 2015, which raised the annual precipitation 10-fold. This trend has been attributed to climate change, which is altering weather patterns. If it continues, Fairén expects that the Atacama micro ecosystems may be utterly changed.

"We'd see a total replacement of the current ecosystems, as the microbes living now in the Atacama won't be able to keep living in a place with large rainfalls," Fairén told Live Science. "They are not made for that."