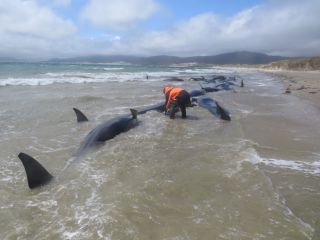 An estimated 145 long-finned pilot whales (Globicephala melas) mysteriously stranded on a remote beach in New Zealand over the weekend, and none of the poor creatures survived.

A backcountry hiker discovered the stranded whales at Mason Bay on Stewart Island/Rakiura, a rugged island 19 miles (30 kilometers) south of New Zealand's southern island. The hiker then trekked to a nearby New Zealand Department of Conservation (DOC) field office to report the finding, according to a statement released today (Nov. 26) from New Zealand's DOC.

But by the time authorities reached the struggling whales, nearly half were already dead. The other half were in such bad shape that experts decided to euthanize them. [See Photos of Whales and Sharks from Above]

"The remote location, lack of nearby personnel and the whales' deteriorating condition meant the most humane thing to do was to euthanize," Ren Leppens, the Rakiura operations manager, said in the statement. "However, it's always a heartbreaking decision to make."

Multiple marine mammal strandings also occurred on other New Zealand beaches over the weekend: 10 pygmy whales, a sperm whale and a dead pygmy sperm whale. But DOC authorities believe the events were unrelated. The sperm whale and two of the pygmy whales died, the DOC reported. Rescuers are working to save the remaining eight pygmy whales.

Pilot whales are one of the largest members of the dolphin family, second only to the killer whale in size, according to the American Cetacean Society (ACS).

Long-finned pilot whales are the most common pilot whale species in the waters around New Zealand, according to the DOC.

Both species of pilot whales are very social and travel in groups of 20 to 90 individuals, according to the ACS, and it's not unusual for the large groups to strand together. The largest documented stranding of pilot whales happened in 1918 and included an estimated 1,000 whales at the Chatham Islands, 497 miles (800 km) east of the South Island of New Zealand, according to the DOC.

But why the whales exhibit this deadly behavior remains a mystery to scientists.

The most agreed-upon hypothesis is that the whales' echolocation isn't as effective in shallow, near-shore waters as it is in the steep areas at the edge of the continental shelf, according to the DOC. Like other cetaceans, pilot whales use echolocation to find their prey (pilot whales eat primarily squid, but also octopus, cuttlefish and small fish, such as herring). It's possible that when the whales' follow their prey closer to shore, the whales become disoriented and are unable to find their way back to sea before beaching themselves.

Another theory postulates that the whales' social tendencies mean that when one whale washes ashore, others follow to help out, only to tragically get stuck themselves. It could also be a combination of factors that causes the animals to strand, but those reasons remain unknown.

The DOC said that it's working with officials from the local Ngāi Tahu tribe to determine what further actions are necessary in response to this most recent stranding.