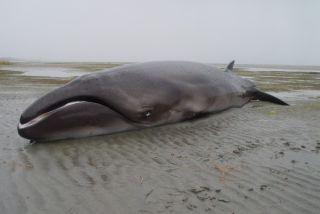 The pygmy whale, a mysterious cetacean that looks radically different from all living whales, is actually the last living member of a group thought to have gone extinct 2 million years ago
(Image: © Darryl Wilson, University of Otago, ONE-TIME-USE ONLY)

The pygmy right whale, a mysterious and elusive creature that rarely comes to shore, is the last living relative of an ancient group of whales long believed to be extinct, a new study suggests.

The findings, published today (Dec. 18) in the Proceedings of the Royal Society B, may help to explain why the enigmatic marine mammals look so different from any other living whale.

"The living pygmy right whale is, if you like, a remnant, almost like a living fossil," said Felix Marx, a paleontologist at the University of Otago in New Zealand. "It's the last survivor of quite an ancient lineage that until now no one thought was around."

The relatively diminutive pygmy right whale, which grows to just 21 feet (6.5 meters) long, lives out in the open ocean. The elusive marine mammals inhabit the Southern Hemisphere and have only been spotted at sea a few dozen times. As a result, scientists know almost nothing about the species' habits or social structure.

The strange creature's arched, frownlike snout makes it look oddly different from other living whales. DNA analysis suggested pygmy right whales diverged from modern baleen whales such as the blue whale and the humpback whale between 17 million and 25 million years ago. However, the pygmy whales' snouts suggested they were more closely related to the family of whales that includes the bowhead whale. Yet there were no studies of fossils showing how the pygmy whale had evolved, Marx said. [In Photos: Tracking Humpback Whales]

To understand how the pygmy whale fit into the lineage of whales, Marx and his colleagues carefully analyzed the skull bones and other fossil fragments from pygmy right whales and several other ancient cetaceans.

The pygmy whale's skull most closely resembled that of an ancient family of whales called cetotheres that were thought to have gone extinct around 2 million years ago, the researchers found. Cetotheres emerged about 15 million years ago and once occupied oceans across the globe.

The findings help explain how pygmy whales evolved and may also help shed light on how these ancient "lost" whales lived. The new information is also a first step in reconstructing the ancient lineage all the way back to the point when all members of this group first diverged, he said.