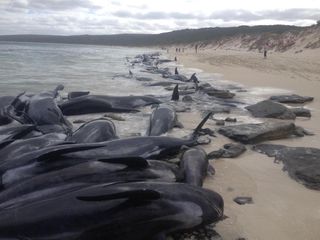 A commercial fisherman in Australia spotted an alarming site this morning: Upward of 100 whales were stranded and dying on a beach at Hamelin Bay, about 180 miles (300 kilometers) south of Perth. (And we're all pulling for a happy ending.)

Rescuers rushed to the scene, but only 15 of the 150 whales, thought to be short-finned pilot whales (Globicephala macrorhynchus), were still alive as of 12 p.m. local time, the Western Australia Department of Biodiversity, Conservation and Attractions reported.

The 15 still-breathing whales were in shallow waters, and rescuers planned to herd them into deeper water by late afternoon, said incident controller Jeremy Chick. [Whale Album: Giants of the Deep]

"Unfortunately, most of the whales beached themselves on dry land overnight and have not survived," Chick said in a statement. "There are only 15 surviving in shallow waters, and we hope to move them out to sea later today."

To make matters worse, windy and rainy weather has made the rescue challenging, he said.

"Rescue operations will be hampered by deteriorating weather conditions, and we need to ensure the safety of everyone involved before we move the whales," Chick said.

It's unclear why the whales became stranded in this case, but large groups of short-finned pilot whales have become stranded before. It's thought that the species is vulnerable to loud, human-made sounds, such as those made by navy sonar, according to the International Union for Conservation of Nature (IUCN). Researchers have yet to show a conclusive cause-and-effect relationship between noise pollution and beached G. macrorhynchus whales, but other mass-stranding events involving this species have happened during times of high human-made noise in the environment, according a 2006 report by the National Oceanic and Atmospheric Administration.

For instance, a series of unusual G. macrorhynchus stranding events coincided with a large-scale military exercise around Taiwan in 2004, the IUCN said.

Short-finned pilot whales live in tropical waters around the world, usually in deep offshore regions, according to the IUCN. These 16-foot-long (5 meters) whales eat primarily fish and squid, but not always with the best results. In 2014 and 2015, two short-finned pilot whales suffocated when flatfish got stuck in their blowholes, Live Science previously reported.

In the case of today's stranding, Chick mentioned that his department had received many offers to help save the whales from the local community. But given that the rescue crew already consists of government workers, veterinarians and trained volunteers, Chick said that the operation had enough skilled people on-site and asked the public to avoid the area.

Moreover, authorities had issued a shark alert. "It is possible the dead and dying animals will act as an attractant, which could lead to sharks coming close into shore along this stretch of coast," the Western Australia Department of Fisheries said in a statement.

The rescue crew is also working to remove the deceased whales from the beach. Parks and Wildlife Service officers are taking DNA samples from the dead whales to look for clues about why the whales stranded themselves.